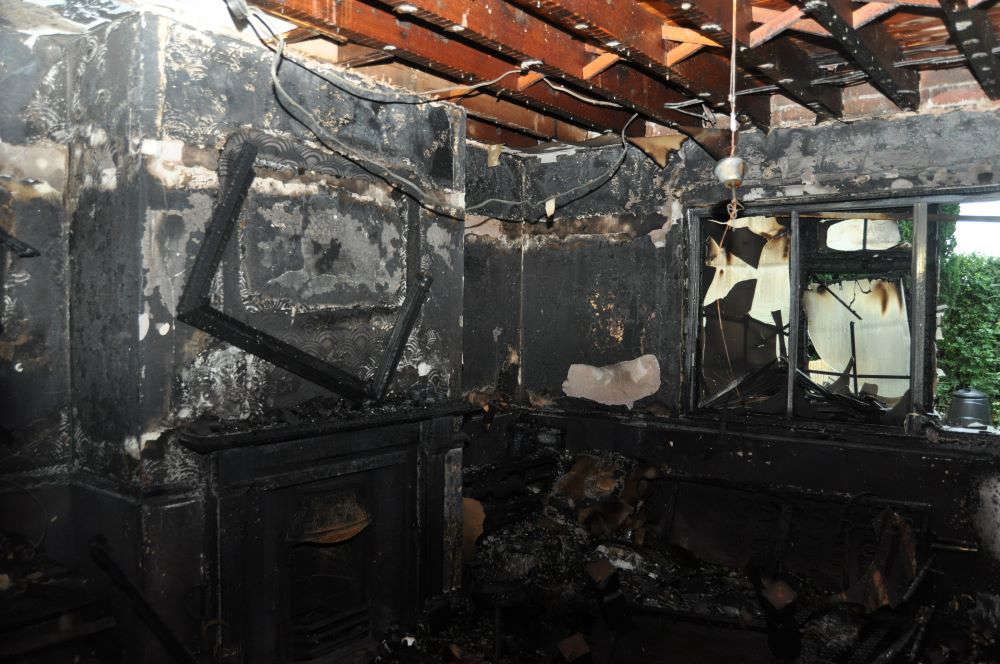 A Chester woman has spoken out about her lucky escape from a house fire, believed to have been caused by an electrical device, to help warn others.

The mum wants her story to help people understand the dangers of using electrical extension leads but also to highlight the importance of having smoke alarms fitted correctly.

Diane Barnett, from Chester, and her family were all fast asleep in the upstairs of their home, when she was woken at around 12:45am on September 28 by a strange noise. Seconds later they were escaping flames and black smoke, which quickly spread through their home.

Diane tells her story: “It was a strange popping sound coming from downstairs that woke me up and alerted me to something not being right. I got out of bed, hesitated for a split second, and then the smoke alarm went off on the landing and I just knew there was a fire. I shouted to my husband Guy and our two sons Tom (29) and Jack (18) to get out.

“I called 999 and was in such a panic as black smoke started filling the bedroom and I became trapped. I went to the window and I saw my husband with a ladder. He smashed the glass but the fire had taken hold so quickly that black smoke was escaping out of the window behind me.

“I couldn’t see a thing. I remember saying my feet were burning to the control operator and sat down on the bed. I was so disorientated and just not thinking right. I then heard one of my sons shouting at the window to come to him and as I did he just dragged me out to safety.

“I later found out that Tom had ran down the stairs when I shouted, but Jack couldn't get out. His brother was outside so started shouting for him to jump onto the annex. He did and fell off the roof and landed on the patio, thankfully with no injuries.  My husband said he knew I was trapped so got the ladders and came to the front of the house. He smashed the bedroom window, which is where I must have got my second wind from because the smoke cleared enough for me to get back to the window. Tom took over from his dad and climbed the ladder and called me to come to him and as I did he just pulled me out head first. My neighbour was also there and I remember him saying to me, as I was lying on the ground outside, that it was ok and that I was out.”

The incident happened at an address in Shotwick-Frodsham Road, Chester. Five fire engine attended the ‘persons reported’ house fire. Two firefighters wearing breathing apparatus entered the building and used hose reels to extinguish the flames. The house was badly damaged by the fire and, sadly, the family dog Bruno lost his life. Dianne suffered burns to her feet which needed treating in hospital. She also suffered a head injury during her escape.

Crews put out the fire and used a large fan to remove smoke from the property. They also checked neighbouring properties for any spread of fire before leaving.

A Cheshire Fire and Rescue Service Fire Investigation Officer attended after the fire and said: “Following extensive investigations I believe the fire started in an extension lead, which the family had been using for a number of years, but without previous issues. They did have a smoke alarm on the landing but it was positioned on the wall, not attached to the ceiling, so unfortunately the fire had time to develop and produce large volumes of smoke before activating.”

Diane added: “If Guy, Tom, Jack and our neighbour Scott had not been there I would not be telling this story, so please everyone check your extension leads or better still, don’t use them. Also make sure you fit smoke alarms if you don’t already have them.

“We went to bed with everything and got up with nothing and we also lost a precious member of our family, our beloved dog Bruno.

“I’d like to thank everyone that has helped us including family, friends and neighbours. Also thank you to the control operator, firefighters and the paramedics who were amazing and came to our aid that night.

“Thankfully we are insured so we are starting again from bare brick and we have moved temporarily into a static caravan while the work is being done. It will be a long time until we are able to move back in, but we are all alive so that’s the main thing.”

For smoke alarm information around where to fit them in your home and for electrical safety advice, please visit:

Pictured - Damage caused by fire in house in Chester.