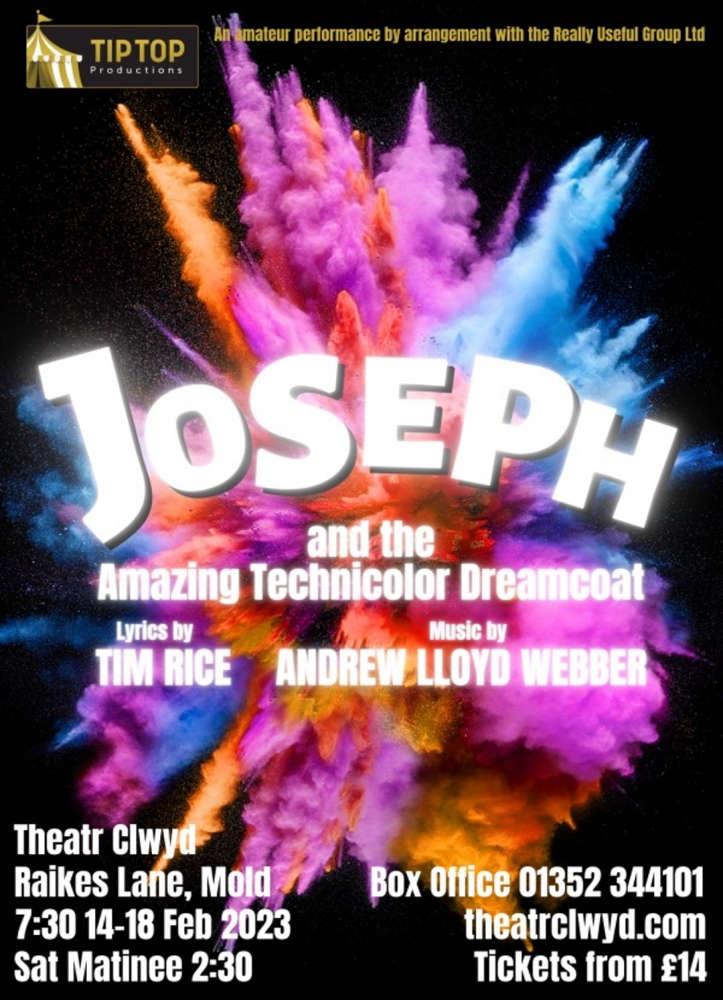 A local community theatre company has announced audition opportunities with the chance to appear in its next large scale musical due to be staged at Theatr Clwyd next year.

Following on from the success of its production of "Cats", Tip Top Productions will stage the smash hit Andrew Lloyd Webber and Tim Rice musical "Joseph and the Amazing Technicolour Dreamcoat" at the Anthony Hopkins Theatr at Theatr Clwyd from 14th - 18th February 2023, with open auditions due to place at Christleton High School in Chester.

Auditions for Adult principal roles including Joseph, his 11 brothers, their wives, Pharaoh, Jacob and Narrator will take place at Christleton High School on Sunday 9th October with auditions for the Children's choir taking place at the same venue on Sunday 16th October.

The colourful show with its soundtrack of well-known songs including "Any Dream Will Do", "Go Go Go Joseph" and "Close Every Door", has seen a whole host of famous personalities including Jason Donovan don the famous coat of many colours since it was first staged back in 1972. The production at Theatr Clwyd will be directed and choreographed for Tip Top by Rob Stevens with musical direction by Simon Phillips.

Anyone interested in auditioning for the show should register their interest with Rob Stevens via email at rastigger1@hotmail.com

In addition to preparations for "Joseph", rehearsals are in full swing for Tip Top's upcoming production of the stage version of the classic BBC sitcom "Keeping Up Appearances" which is being staged at Rossett Village Hall from 2nd -5th November.

Specially written for the stage by the show's creator and writer Roy Clarke, this adaptation of the popular TV series features favourite characters including social climbing snob Hyacinth, Onslow, Daisy, Rose, Liz and Emmett.  Speaking about the production, Steve Davies, Tip Top's Artistic Director said " In keeping with our vision to reach out into the community, Keeping Up Appearances is Tip Top's first "site specific" production - a play set in a village hall actually being staged in one, we're very much looking forward to it."

Full details of the upcoming auditions for Joseph and the Amazing Technicolor Dreamcoat along with box office details for "Keeping Up Appearances" can be found at: