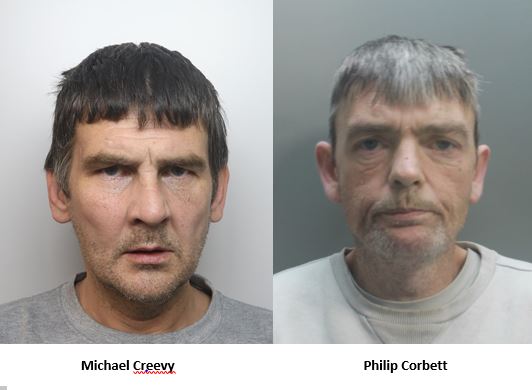 Two men from Chester have been jailed after attempting to rob a taxi driver at knifepoint in the city.

Michael Creevy, 46, and Philip Corbett, 45, pleaded guilty to attempted robbery and making off without payment when they appeared at Chester Crown Court, via a video link, on Wednesday 23 September.

The pair were sentenced for the offences at the same court on Wednesday 14 October.

Creevy was jailed for four years and nine months and Corbett was handed a four-year prison sentence. The pair were also each ordered to pay a £190 victim surcharge.

They committed the offences at around 2.30am on Thursday 27 August.

After taking a taxi from outside their home in Norman Way, Blacon, Chester, to Kingsway in the city and back, they told the driver that the money for the fare was inside their address.

The driver gave Creevy and Corbett permission to leave the taxi to get the cash from their home.

When they returned the driver asked for the money he was owed.

At that point one of the offenders walked behind the driver and restrained him whilst the other held a knife against his stomach and made several demands for cash.

They then began to search the driver, who managed to escape their clutches and run away from them up Sherwood Road.

Creevy and Corbett then tried to open the taxi’s doors, which were locked, before going back to their home empty-handed.

Police were called and the pair were located and arrested within minutes.

Creevy and Corbett refused to answer any questions whilst in custody, but they admitted to being responsible for the attempted robbery as soon as the case progressed to a crown court.

“After failing to pay him for taking them to where they wanted to go, the pair demanded cash from the driver and threatened him with a knife in the street.

“Thankfully he managed to get away from them without being harmed or having anything stolen.

“In addition, he was able to tell us where the pair were so that we could arrest them and have them brought to justice.

“With the extent of the evidence we gathered against Creevy and Corbett, they had little choice other than to plead guilty to attempted robbery and making off without payment.

“I am delighted that they have now received custodial sentences for their actions that night and I hope that this brings some closure to the victim and enables him to move forward with his life.

“I also hope that the convictions of Creevy and Corbett serve as a deterrent to other people and stops them from committing similar crimes, and that this case sends out a strong message that knife crime will not be tolerated.

“At Cheshire Constabulary we are committed to doing all we can to tackle knife crime.

“We will respond robustly to any knife related incidents and do everything we can to ensure that anyone found to be carrying a knife or committing a knife related offence is brought to justice.”

Chief Inspector Sarah Heath, who is Cheshire Constabulary’s knife crime lead, added: “Cheshire has a lower rate of knife crime than most other counties in England.

“However, we will not be satisfied until we have achieved our goal of achieving weapons-free streets throughout Cheshire.

“We have a multi-faceted approach to tackling knife crime at Cheshire Constabulary and we will continue to work alongside various partner agencies to endeavour – through education, awareness and action – to make Cheshire a county in which no-one carries a knife or feels that there is a reason to do so.

“I urge anyone with information regarding knife crimes or those who carry weapons to give us the details.

David Keane, police and crime commissioner for Cheshire, said: “The consequences of carrying a knife can be devastating for everyone involved.

“As the county’s police and crime commissioner, I will continue to work with Cheshire Constabulary and our communities to reduce the number of dangerous weapons on our streets, and to educate people about the dangers of knife crime, and I urge anyone with information about those who carry such weapons to come forward in confidence and report it.”

To report any type of crime involving weapons call Cheshire Constabulary on 101, or 999 in an emergency.

Information can also be passed to the force online via https://www.cheshire.police.uk/ro/report.

Anyone who knows someone that carries a knife can report it to Crimestoppers, anonymously, on 0800 555 111.