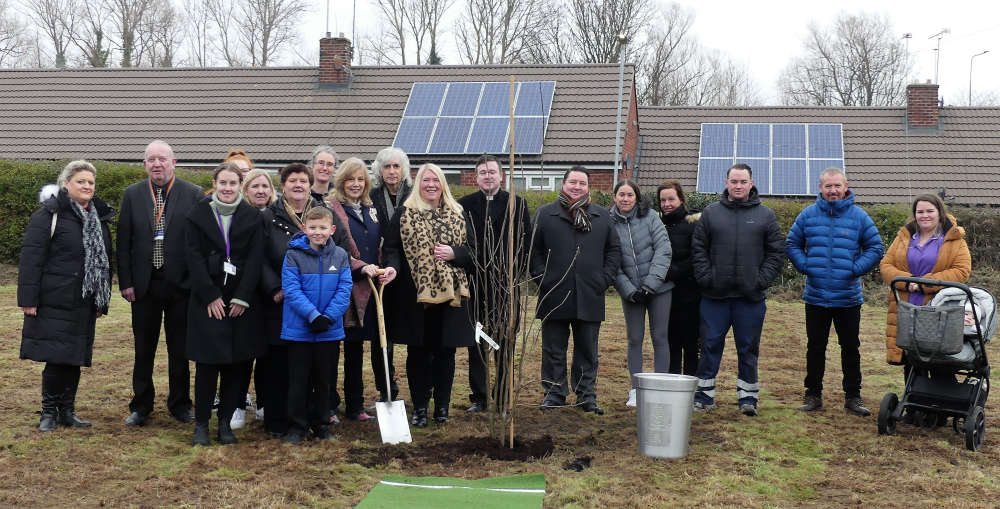 The Westminster Families Community Group in Ellesmere Port was thrilled to receive one of the 350 trees used in the spectacular ‘Tree of Trees’ sculpture from the Queen’s Platinum Jubilee celebrations.

The Rowan tree was presented to the Group at a ceremony on Tuesday 24 January at George Street Bowling Green in Ellesmere Port.

The tree was planted by Lady Redmond, Lord-Lieutenant of Cheshire, with Councillor Lisa Denson (the current Mayor of Ellesmere Port) and Jacqui Coombes, who both founded the Westminster Families Community Group, and Jacob, a pupil from Westminster Primary school.

The ‘Tree of Trees’ was a 21-metre sculpture outside Buckingham Palace, an exciting centrepiece for the Queen Elizabeth II’s Platinum Jubilee weekend in June 2022.

Designed by Thomas Heatherwick, the sculpture celebrated the Jubilee tree planting across the country as part of the Queens Green Canopy (QGC). Over a million trees were planted in the first season, from October 2021 to March 2022.

The sculpture aimed to put the importance of trees and nature at the heart of the celebrations for Her Majesty, who planted over 1,500 trees across the world throughout the course of her 70-year reign. The 350 trees are set in aluminium pots embossed with Her Majesty’s cypher.

His Majesty’s Lord-Lieutenants were asked to nominate organisations and groups they believed made a positive and measurable impact on their communities.  Each tree has been gifted by His Majesty The King to celebrate their work and inspire the next generation of tree planters across the nation.

Lady Redmond MBE, Lord-Lieutenant of Cheshire said: “Westminster Families Community Group is a very worthy recipient, in this, the year of their tenth anniversary.

“The Group is run by local families, for local families and since 2013 it has thrived, now running a varied programme of events and activities to support the local community throughout the year.  These very special trees are now being planted in memory of Her Majesty Queen Elizabeth II.”

Cheshire West and Chester Council’s Deputy Leader and Cabinet Member for Environment, Highways and Strategic Transport, Councillor Karen Shore said: “It was a great honour to see the tree being planted at today’s event.  The area around the tree is going to be developed in a community allotment and outdoor reflection space for residents.

“In addition to the tree, the Westminster Families Community Group also received a letter about the Tree of Trees (including a message from Her Majesty issued at the end of the first planting season) and a letter from the chairman of the Queen’s Green Canopy.”

Funding is available across the borough for various tree planting projects through the national Trees for Climate programme. The multi-million-pound programme, which is managed by The Mersey Forest, provide grants that can cover up to 100 per cent of the costs for woodland creation and 15 years of maintenance payments.

Landowners, farmers or organisations with land suitable for planting new woodland from next season tree can contact The Mersey Forest team by calling:

The Queen’s Green Canopy (QGC) is a unique tree-planting initiative marking Her Majesty’s Platinum Jubilee in 2022, inviting people from across the UK to ‘Plant a tree for the Jubilee’ creating a legacy in honour of Her Majesty’s leadership of the Nation, benefiting future generations.

Focusing on planting sustainably, the QGC is committed to supporting planting trees in some of the most deprived UK schools and urban areas, increasing access to green space, with innumerable benefits to health and mental wellbeing, improving the quality of life in communities, and promoting the vital importance of ancient trees and forests to the environment.