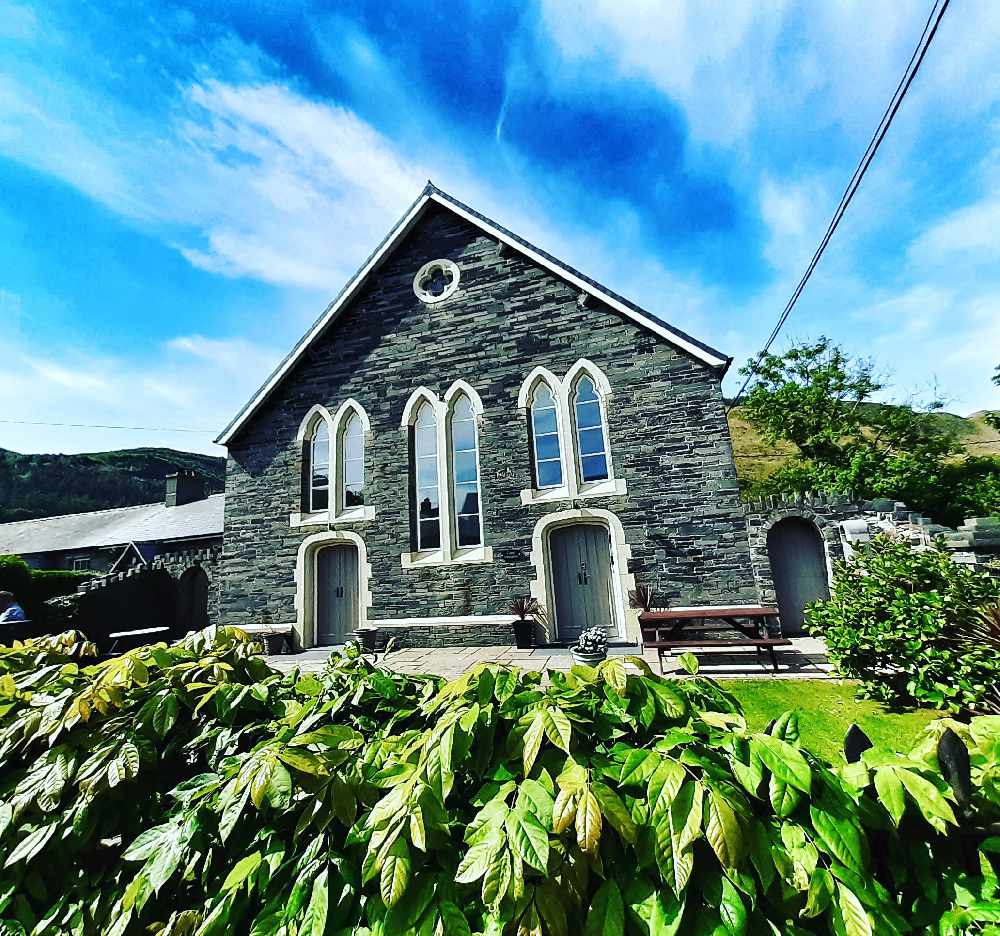 Property prize draws are increasing in popularity, with some amazing homes up for grabs – but this stunning conversion in Southern Snowdonia offers the chance to win not one, but two beautiful homes, fully furnished and valued at £700k and at least £100,000 will be donated to the Alzheimer’s Society.

Martin and Sue Stephenson have launched www.winadreamproperty.co.uk , with tickets just £3 (or 4 for a tenner). They’re hoping to sell 330,000 tickets, which will enable them to donate at least £100,000 to Alzheimer’s Society.

This could be a life-changing opportunity for someone to escape to a beautiful home, in a stunning part of the world, with the option of a ready-made business and income.

With the recent increase in popularity of country homes and the realisation that many people can work from home, this fabulous property could be the perfect life-style choice. Martin and Sue currently live in Jerusalem Vestry and enjoy the holiday let income from 5-star Capel Jerusalem.

The prize is both houses, with a total of seven en-suite bedrooms, fully furnished and with a sauna, hot tub and baby grand piano. Capel Jerusalem, which sleeps 10, will be fully equipped as a holiday home, should the lucky winner wish to continue running it as a holiday let.

The couple bought the building 16 years ago, as a disused chapel, in a state of disrepair. They admit to having a soft spot for old buildings and Martin, a building surveyor, has a particular interest in ecclesiastical architecture.

He explained: “We didn’t really know what we were going to do with it, we just knew that it needed rescuing. We’d done a couple of renovation projects, which basically meant we’d lived in a series of building sites, but we’d never tackled anything on this scale before.”

Initially the couple made the building safe, but it was a few years and several conversations with Snowdonia National Park before the work began.

Martin added: “Our original planning application was for six one-bed homes, as we fully expected the planners to want us to convert it into affordable housing. However, they insisted on it being just two houses.

“The building was so large that this presented a challenge in itself, but it also gave us the opportunity to create two luxury homes, whilst preserving some of the character of the building, such as the beautiful ceiling details.

Sue explained that it wasn’t an easy project and what started as a purchase ‘on a whim’ took over their lives.

“It really was a case of blood, sweat and tears…. and our life savings. For the first two years of the development we were both working full time. At weekends we’d travel to Snowdonia to project manage and do whatever we could on-site.

“Once the vestry was habitable we closed our businesses, so we could move into it and concentrate on the conversion. We sold our home in Shropshire to fund the rest of the work on the chapel.

They worked long hours, in all weathers and Sue remembers getting the short straw.

“I spent many, many months up the scaffold, through the winter, restoring and painting the windows, ready for double glazing. I was wearing seven layers of clothing and only stopped when the paint blew off my brush or froze in the tin. I’m a bit of a perfectionist and, despite the conditions, I was determined to get four coats of paint on.”

Martin used his expertise and construction knowledge to get every design detail absolutely perfect and Sue, having spent many years working with a renewable heating company, was involved in the design of a highly efficient and affordable heating system, with underfloor heating, solar panels and an Air Source Heat Pump.

“The heating system took a large chunk of the budget, but with such large spaces it’s important to get an even heat, from a system that’s affordable to run. It’s a brilliant, eco-friendly system and well worth the investment.”

The conversion was completed in 2014 and resulted in two stunning homes – perfect for Staycations, holiday lets or full-time living in a beautiful part of the world.

Lockdown brought a few things into focus for the couple and, having decided to move closer to family, they hit on the idea of giving someone the chance to win the historic property in a prize draw. The main motivation was the opportunity to raise money for a charity, at a time when all charities are struggling.

Sue, 53, a former marketing consultant, said: “A few years ago we put together a joint bucket list. It included visiting the Great Wall of China, appearing as Extras in TV & film and sword fighting in Japan. We also wanted to raise a large amount of money for charity.

“Having completed most items on the bucket list, the prize draw will help us tick the charity box, as well as creating a life-changing opportunity for someone. It really is a win-win situation.”

They chose Alzheimer’s Society as their charity partner because it’s a charity close to their hearts.

Martin explained: “We have sadly lost two relatives to this terrible disease and my dad was diagnosed with dementia a couple of years ago.

“The aim is to sell enough tickets to be able to donate £100,000 to Alzheimer’s Society, to help them in the important research and support services that they offer.

“So far we’ve sold more than 50,000 tickets. This is when it gets interesting. We have built a good following on Social Media, we have a marketing plan in place and we have a monthly prize draw and free ticket scheme, to encourage everyone who’s entered to spread the word. The closing date is 11th December and the draw will take place on 18th December 2020.”

Martin and Sue are moving back to their native Yorkshire to be close to elderly parents and grandchildren.

Martin added: “We always planned to move back to Yorkshire, due to family ties, but we have loved living in Snowdonia. It’s been a beautiful place to spend lockdown.”

Their next project is a school conversion in the Yorkshire Dales. However, Sue confirmed that they won’t be raffling the school once it’s finished.

She insisted: “Absolutely not. This will be our final project and our forever home.”