THEATRE COMPANY ON THE LOOKOUT FOR TWO "PURRFECT" PERFORMERS 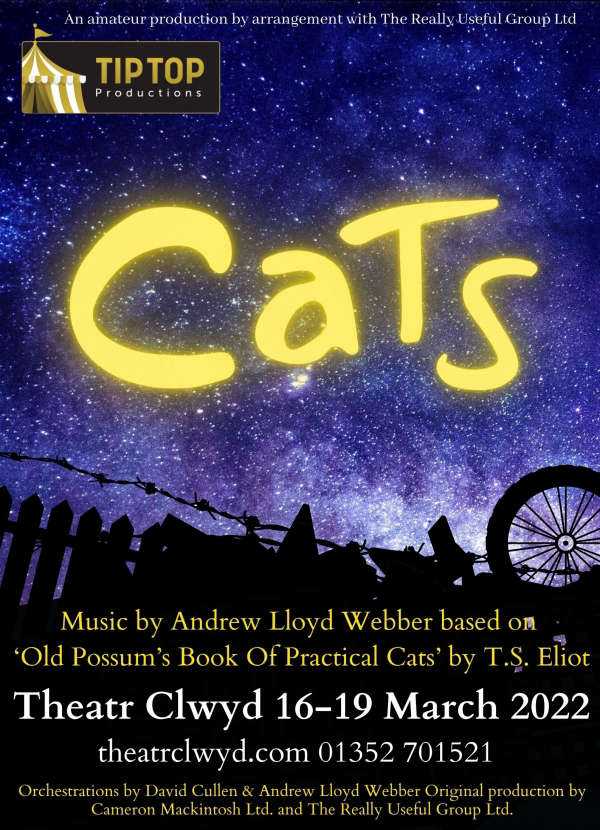 A local theatre company is looking for the "purrfect" performers to cast in two key roles for its production of one of Andrew Lloyd Webber's most famous musicals.

Following a successful round of auditions, local theatre company Tip Top Productions have announced that they have cast all except two key roles for their production of the iconic West End and Broadway musical CATS which will be staged at Theatr Clwyd in March next year.

The show's producers are now looking to cast the principal roles of Grizabella & Old Deuteronomy, famously played by Elaine Paige and Brian Blessed in the original production.

Speaking about the iconic roles up for grabs, Tip Top's Artistic Director Steve Davies said "After two very successful auditions last week we have a very talented cast of 28 performers raring to go but we're still on the lookout for two of the principals to complete the line-up. The parts of Grizabella & Old Deuteronomy, played by Elaine Paige and Brian Blessed in the original production, are still available and the production team are inviting anyone who is interested in auditioning for them to come along to Park Street Studios, Wrexham on Tuesday 7th December at 7.30pm.

Steve added "Grizabella is a survivor and was once a very glamorous cat but now her beauty is fading with age, she sings the song most associated with the show, “Memory”. Old Deuteronomy is the leader of the Jellicle tribe of cats and during the show he has a number of solos too".

For further information and to receive the audition pieces get in touch with Rob Stevens, director & choreographer, via the email address: