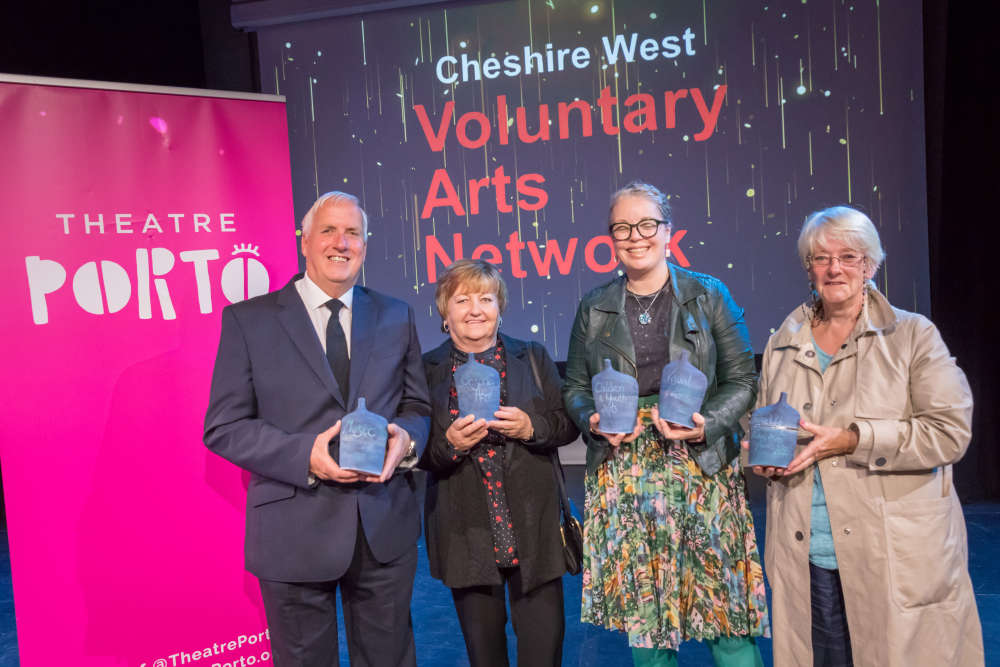 The Cheshire West Community and Voluntary Arts Awards 2022 were held at Theatre Porto in Ellesmere Port on 20 September.

Councillor Louise Gittins, Leader of Cheshire West and Chester Council said: “Many congratulations to all of our winners, highly commended and nominated groups and individuals. Without all of you we wouldn’t have such an exciting and varied arts programme across the borough.”

There were performances from Theatre Porto’s inspiring Young Writers, Deva Flamenco’s dancers who had the audience joining in with their dancing and a rousing finale from Chester Male Voice Choir.

Angela Chappell, Relationship Manager for Combined Arts at Arts Council England announced the award for Music that was presented to The Chester Male Voice Choir.

The Choir has made an impressive contribution to the Arts in Chester and surrounding areas over the last 81 years. The Choir has raised many thousands of pounds for charitable and other good causes, and has performed on television and on radio, in front of Her Majesty the Queen and in many of the great concert halls throughout the country including the Royal Albert Hall in London, Manchester Free Trade Hall, and the Liverpool Philharmonic Hall, as well as having sung in several of the great cathedrals of Europe and the UK.

The Visual Arts award winner was The Together Tunnel by Minerva Arts, a community project in the Lache. designed to bring communities back together after Covid. The judges liked this project as it brought local people together through participation in art to create a collaborative installation that the community as a whole could be really proud of.

The Performing Arts award went to Deva Flamenco who run dance classes for beginners and improvers in Chester. They also organise special workshops with professional flamenco or Gypsy dancers, often from Andalucia. The judges were struck by their passion to share and foster a love of flamenco history, music and dance with communities in Chester and surrounding areas.

Children and Youth Arts winner was Upton Youth Theatre, a drama group with a core of eight, local young people aged 8 to15 who come together to learn new drama skills and create their own pieces of performance. Although small in scale the judges felt that the Theatre fulfilled a local need providing high quality and inclusive arts provision to children and young people right on their doorstep.

Steph Meskell-Brocken, Chair of the Cheshire West Voluntary Arts Network announced the Unsung Hero award that was presented to Julie Elston from Theatre in the Quarter. The judges felt it impossible to ignore the immeasurable contribution Julie has made to the smooth, safe operation of the projects, and happiness of staff and participants of Jigsaw and Theatre in the Quarter’s projects over the past 30 years.

The High Sheriff of Cheshire Award

Theatre Porto received the High Sheriff’s award for outstanding contribution to the community.

Councillor Gittins announced the final award of the evening, the Outstanding Contribution Award, presented to the army of volunteer promoters, who select, manage, market and host the live performances in and for their communities as part of Cheshire Rural Touring Arts.

Unsung Hero
Julie Elston from Theatre in the Quarter

Pictured - Some of the Award Winners.