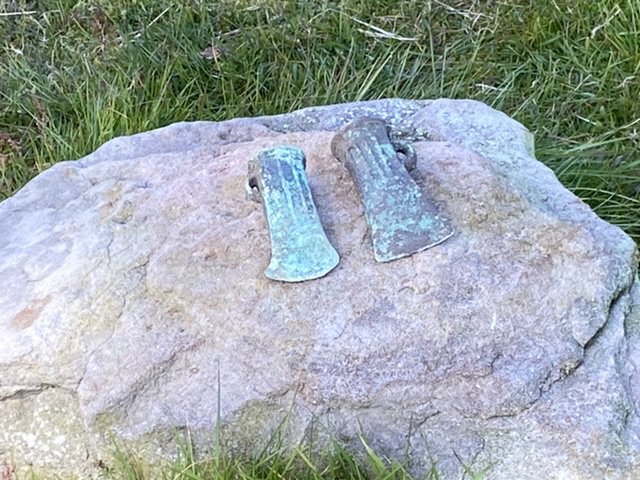 A Tameside nighthawking gang has been sentenced after admitting metal detecting at two historic monuments in Cheshire and South Yorkshire.

The men appeared at Chester Magistrates on 7 May for sentencing following an investigation by Cheshire Police, Historic England and South Yorkshire Police.

All five were handed a five-year criminal behaviour orders which prevents them from metal detecting at any English Heritage site England and Wales - a first for Cheshire, and the North West.

Curtis Barlow, 32, of The Quadrant, Droylsden, admitted taking coins and metal artefacts from Roche Abbey between 13 and 15 December 2019. He was handed a £572 fine along with £85 surcharge.

Gary Flanagan, 33, of Winton Avenue, Audenshaw, admitted taking coins and metal artefacts from Beeston Castle and Roche Abbey between 13 and 30 December 2019. He was handed £1,100 fine plus a £85 surcharge.

Daniel James Lloyd, 33, of Beech Avenue, Droylsden, admitted taking bronze age axe head’s, coins and other metal artefacts from Beeston Castle between 13 and 30 December 2019. He handed £600 fine plus a £85 surcharge.

Francis James Ward, 32, of Dingle Drive, Droylsden, admitted taking an bronze age axe head’s, coins and other metal artefacts from Beeston Castle between 13 and 30 December 2019. He also admitted producing a small quantity of cannabis. He ordered to pay £1,430 court costs plus a £85 surcharge.

They were ordered to forfeit all artefacts and their metal detectors which have an estimated value of up to £1,000 and above.

The men’s illegal activities were unearthed when a number of holes were found in the grounds of Beeston Castle and Roche Abbey, both historic sites in the care of English Heritage, sparking an investigation in December 2019.

Further information led them to Ward and on New Year’s Eve, officers from Cheshire executed a warrant at his Drolysden home.

This then led officers to Lorne and his home was searched during a warrant at which a number of items were seized.

Both men were arrested and interviewed while mobile phones and other devices were seized.

When analysing their phones officers discovered both men were part of a nighthawking WhatsApp group, leading to the arrest of Lloyd, Barlow and Flanagan.

PC Ashley Tether from Cheshire Police’s Rural Crime Team led the investigation. He said: “Their WhatsApp group clearly showed what they were up to and our subsequent forensic investigations alongside South Yorkshire police put them at the locations where the incidents had occurred. What followed was a number of months of carefully identifying and cataloguing the historic artefacts they had taken with the help of Historic England experts. The evidence we put together was such that they pleaded guilty at their first hearing.

“The theft of historic items and the damage caused to scheduled monuments and listed buildings is an assault on our history and the impact on the historic ground they have damaged should not be underestimated.

“The items these men took for their own gain are part of our rich history and need to be protected which is why we embarked on a lengthy and complicated investigation with Historic England and South Yorkshire Police Rural Crime Team.

“These men are now barred from metal detecting near historic sites in England and Wales and if they want to do so on any other land, they need to show the land owner a copy of the CBO before conducting metal detecting activity - if you see them not adhering to this restriction you can report it to police on 101. Breaching such orders can result in a prison sentence.”

Mark Harrison, Head of Heritage Crime Strategy for Historic England said: “A decade ago, we did not have the skills and techniques necessary to investigate this form of criminal behaviour. We have now developed the expertise, capability and partnerships to identify and prosecute the small criminal minority of nighthawks. The overwhelming majority of metal detectorists comply with the legislation and codes of practice.”

Mark Harrison added: “When thieves steal artefacts from a protected archaeological site, they are stealing from all of us and damaging something which is often irreplaceable.”

English Heritage Properties Curator Win Scutt, said: “Illegal metal detecting robs us of our past, and whilst this prosecution is good news, sadly the damage incidents like these cause can never be repaired. Beeston Castle and Roche Abbey are protected in law because of the lessons we can learn from their unique archaeology. Unlawful attacks like these can cause such insight to be lost forever. We are grateful to Cheshire Police and Historic England for their persistent and innovative approach to investigating this case, and bringing the perpetrators to justice.

“The ground beneath us is a wonderful library of our past. Holes dug by metal detectorists cut through these unread pages destroying all the information forever – just to tear out a precious trinket that will usually end up lost in a private collection. English Heritage is dedicated to preserving these nationally important archaeological sites. The damage incidents like these cause can never be repaired and the chance to learn about these important sites is lost for ever. We are grateful to Cheshire Police and Historic England for their persistent and innovative approach to investigating this case, and bringing the perpetrators to justice."