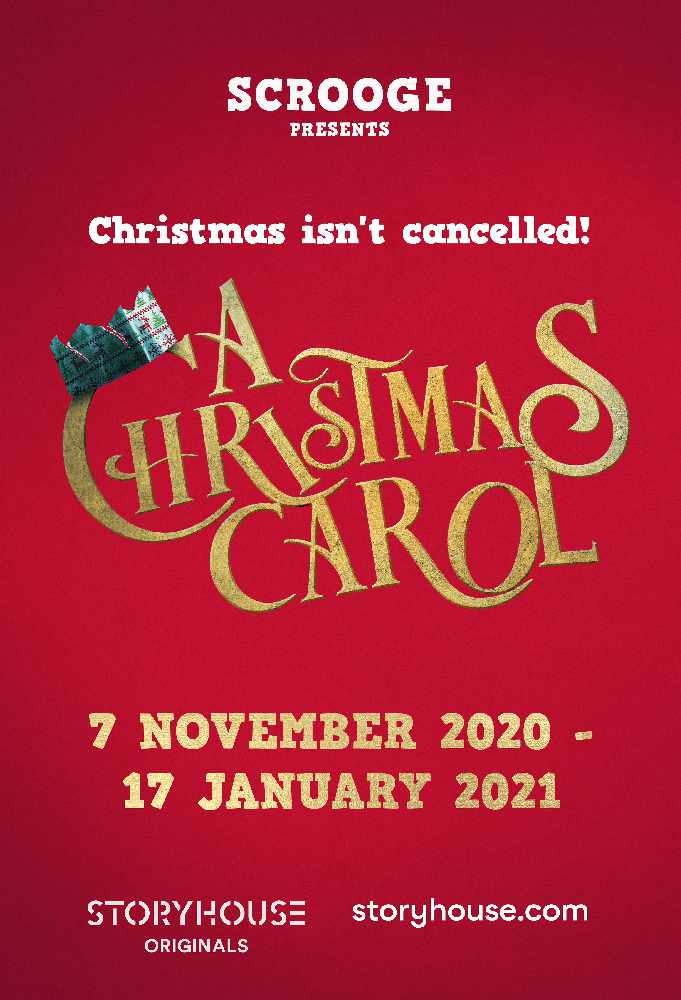 Christmas is to come early at Storyhouse, as it announces A Christmas Carol its “most joyous show ever” to add some much-needed cheer.

A Christmas Carol opens early November to limited audience of 200 per show, increases run to cope with expected demand and help with its battle for survival.

Christmas is officially happening in Chester as Storyhouse launches its Christmas show A Christmas Carol.  The producer, which sold over 5,000 tickets in the space of just two weeks for A Comedy of Errors in August, will be one of only a tiny handful of venues in the country running Christmas shows this year.

The show will play to around 200 per night around the theatre’s more intimate thrust stage - around 40% of normal capacity, to allow for social distancing.  With only less than half the normal number of seats on sale, the venue is starting Christmas early to allow for the expected demand.

Storyhouse’s own Artistic Director Alex Clifton is both writing and directing the adaptation of Dickens’ best loved story: “it’s going to make you cry and giggle your heart out; it’s the ultimate tale of redemption and how Christmas can make us all realise what’s important to us – family and community, something we all need more than ever right now.  It’s a tale for every generation and hopefully can give us all a joyful taste of our normal lives, as we spend Christmas together at Storyhouse”

Storyhouse is currently the only major theatre in the region planning to stage a full-size Christmas show and is bucking the trend, which sees most UK theatres closed until at least the spring of next year.  CEO Andrew Bentley is keen to point out that closure is not a choice that his organisation would be comfortable with: “this is about preserving jobs and serving our community, simple as that. Storyhouse was the country’s first theatre, first library and cinema to re-open, we’re doing that because we’re wanted and needed; we can’t expect our city to help us if we’re not prepared to go the distance.”

The much-loved venue’s battle for survival continues following a successful summer of open-air theatre and cinema as Andrew points out: “the prospect for the UK’s cultural venues is becoming worse since the summer, with venues opening dates getting pushed further and further back.  We expect subsidies to become harder to find as government budgets are harder come by and at the moment 70% of UK theatres are still at risk of extinction beyond Christmas; the danger is they’ll be bailed out in the short term but find they have no audience left. We have had over 4,000 new members join us since the summer and we would urge everyone to help save Storyhouse by joining with us at Christmas, we’ll be repaying the love with a cracking family holiday show”

Storyhouse has been open safely since 4th July.  Audiences are socially distanced and shows will have no interval to avoid a queue, otherwise theatre audiences can experience the same as cinema goers. None of the air in the theatre is re-circulated and the venue is cleaned between shows.

Find out more at storyhouse.com

Storyhouse is one of the UK’s foremost cultural centres incorporating a library, theatres and a cinema. It is one of the country’s most successful arts buildings, with more than one million customer visits each year.

The pioneering new library within Storyhouse, where members of the community work alongside city librarians, boasts the longest opening hours of any UK public library and is open every day until 11pm. It runs over 2,000 sessions a year for marginalised communities

Storyhouse currently holds the official title as the UK’s Most Welcoming Theatre (2019/20) and was the overall national winner in the 2018 Guardian Public Service Awards.