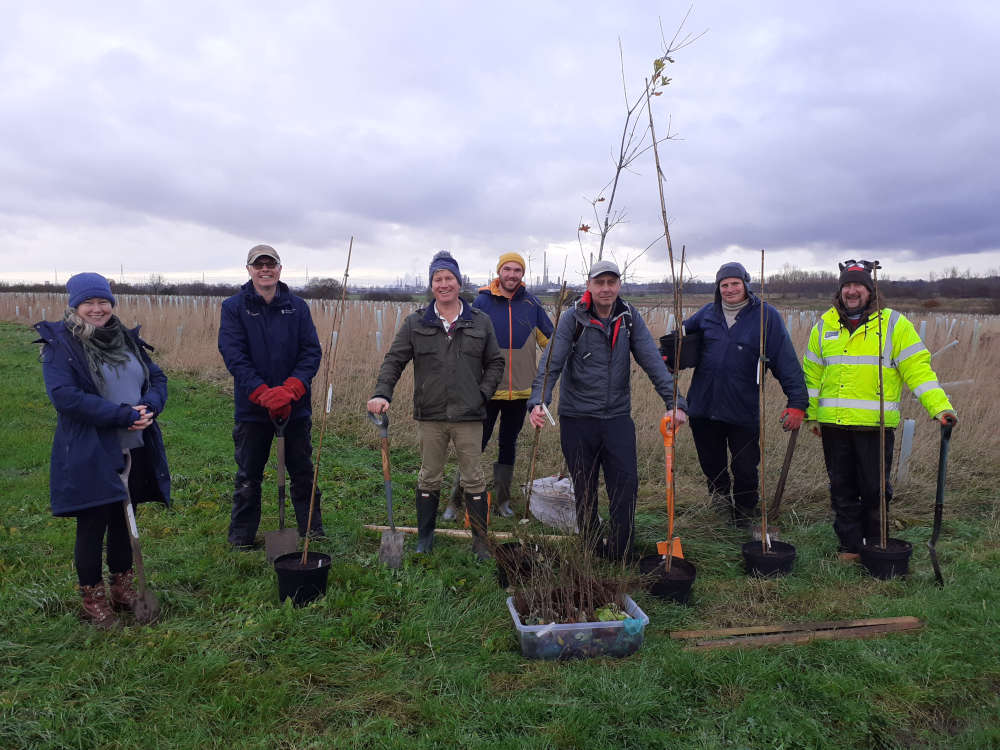 Cheshire West and Chester Council’s Total Environment team have been busy during National Tree Week (27 November – 5 December) replacing saplings, planting an oak tree and rare black poplar trees on a site in Picton, on the outskirts of Chester.

The team, who care for the natural and historic environment across the borough, have previously planted 12,366 trees and 305 metres of hedgerows at the site earlier in the year, using funding from the national Trees for Climate programme.

The Council, through The Mersey Forest, is the accountable body for Trees for Climate, a national multi-million pound woodland creation programme, part of the national Government-led Nature for Climate Fund, which is being delivered by 13 Community Forests across England.

Native black poplar trees are an endangered species, with only around 7,000 left in the UK, often growing in isolation. These large trees, growing to a height of around 30 metres, were once widespread across the borough’s floodplains.

This tree species is very valuable for wildlife with over 100 specialist insects associated with it, including a variety of moths such as the hornet moth, wood leopard moth and poplar hawk moth. Catkins on the trees also provide an early source of nectar for bees and the seeds are enjoyed by finches.

The black poplar trees have been provided by Chester Zoo as part of one of their species recovery programmes.

Philip Esseen, Curator of Botany and Horticulture at Chester Zoo, explains more about the programme: “As well as working to prevent extinction of animals, we’re committed to plant conservation here at Chester Zoo. There are a lot of threatened species on our doorstep in the UK. We have been growing black poplars for over 10 years, the material being collected from cuttings of old trees growing in Cheshire. It’s important to use material from a number of different trees, as some have different genes, and this helps to maintain a healthy population which can adapt to climate change or other environmental factors. Our expert team have grown over 1,500 black poplars here at the zoo, and while most have been planted in Cheshire, some have gone as far as Devon and North Wales.”

A larger oak tree was also planted during the week. This will be pollarded, were the top branches are cut back to its trunk, to provide a future perching point for barn owls and other predatory birds to save energy in the winter while they hunt the newly created grassland.

Alongside the work to introduce trees to the site, six hectares of wet fields were planted in September with a special native wildflower and grassland mix to help restore some of Cheshire’s important herb rich hay meadows. The grassland will play its part to help capture carbon, storing it in the soil and is also an important food source for moths, hoverflies, bees and butterflies, which help to pollinate crops.

Councillor Matt Bryan, Cabinet Member for Housing, Planning and Climate Emergency, said: “It’s fantastic to have Chester Zoo support us to introduce black poplars back to this site in west Cheshire. We’ve recently declared a nature crisis, with a commitment to protect land for nature by 2030, and our Climate Emergency Response Plan includes actions to enhance local biodiversity. The work being done on this site will create a rich mosaic of habitats, attracting wildlife and playing its part to help capture carbon.

“The team plan to use the grassland meadows as a donation site to collect wildflower and grass seed which will benefit other areas of the borough where similar meadows will be created.”

A consultation on a draft Land Action Plan for the borough is currently open until the 12 December. The plan sets out a vision for land in west Cheshire, including 68 actions that will help to restore and protect nature, which will both help tackle the climate crisis and provide many benefits for our communities. Residents can give their views by taking part online. The consultation is available to view on the Participate Now site.