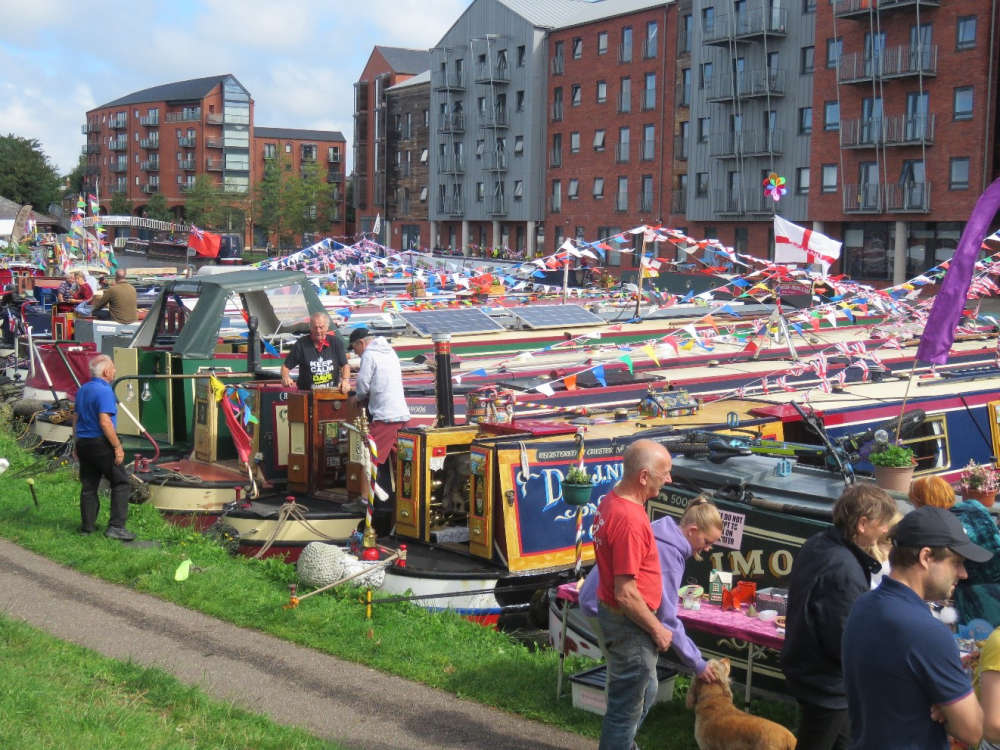 Decision makers made aware of the economic value of a waterway.

Faced with a plethora of events in the area as the nation tries to catch up after Covid, organisers for the weekend of 30th/31st July celebration of the opening of the Chester Canal, the Chester and Merseyside branch of the Inland Waterways Association (IWA) were concerned that the public may go elsewhere. However on the days,  after an intense publicity campaign by IWA volunteers all fears were dispelled and over 1,000 visitors rolled up to enjoy the free event.

There were 9 trading boats at the event which pleased the organisers and they were all well patronised by the public. Incredibly so much so that the pizza and cake stand trade boats sold out by Saturday evening and had to completely restock for the Sunday visitors. The Saturday evening commercial BBQ stall holder was also delighted having only one burger and three sausages left at the close of the evening!

Blessed with improving weather and based around Tower Wharf close to the city centre, the opening ceremony featured Louise Gittins, leader of Cheshire West and Chester Council. The event had a waterways education programme for children, trade boats , live music and most popular of all was the local Aspara dance troupe and their pole dancing routine.

Experts were on hand both to take visitors on guided tours of the historic inland port and to explain the role of the Chester Canal in the waterway network especially the Shropshire Union canal system from its opening in 1772 to present day.

The event, possibly coming so soon after Chester was named as the first Historic Inland Port in the UK, attracted a number of senior people from Canal & River Trust whilst councillors and the local MP, Chris Matheson were also in attendance.

Jim Forkin Chairman Inland Waterways Association (IWA) Chester and Merseyside branch said “As so many towns across the nation seek ways of finding a new purpose for their town centres and envy those with a canal or want their derelict canal restoring, Chester is incredibly fortunate having both a canal and a navigable river within the city centre. The problem is that they are not joined up, but with a relatively small amount of capital providing a lock within the weir and maintenance of the Dee branch , boats could once again navigate out onto the Dee and up the river almost to the Welsh  border with the economic benefits that would bring “

Volunteers worked tirelessly at the event safely mooring some 30 plus narrow boats on Friday afternoon and from 7.30am Saturday erecting gazebos, banners and marquees. Unfortunately, several narrowboats failed to arrive as the route they were taking via the Anderton Boat lift, River Weaver and Manchester Ship Canal to Ellesmere Port became impassable due to the closure of the Boat Lift on the day they were expecting to be lowered onto the river Weaver.

Although primarily a celebration for Chester, three waterway restoration societies had stalls from the Montgomery, Sankey and Manchester & Stockport canals meeting many members of the public.

Jim Forkin Chairman IWA (Chester and Merseyside) said “There were many other events in the area that weekend to compete with Chester`s celebration and we were delighted with the visitor numbers to help make the event such a success. Once again, the public have demonstrated the popularity of the nations waterway system”.

Pictured - The boats at Tower Wharf.