Precious parrots hatch for the first time at Chester Zoo 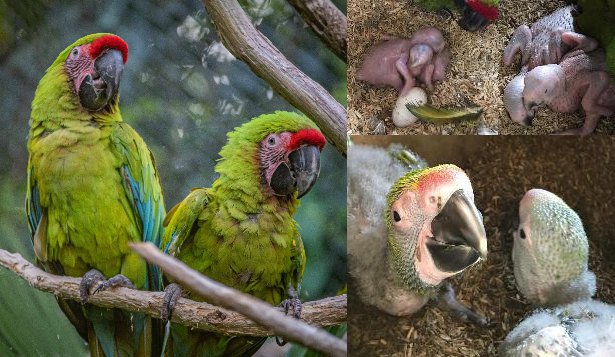 The precious pair, which hatched in April, have spent the last three months hidden away inside their nest under the diligent care of new parents, Royan and Dresden.

Conservationists at the zoo have been keeping a close eye on the new duo; carefully monitoring their development in the nest and providing plenty of nuts, seeds and fruit to help feed the chicks. The youngsters, which fledged after more than 90 days in the nest, will remain with their parents for some time while they learn all the behaviours needed for adulthood.

In the wild, the colourful birds live in the lowland forests of Central and South America, ranging from Honduras, Nicaragua, Costa Rica and Panama to Northern Colombia. There is also a tiny population in Ecuador, thought to consist of just 30 - 40 individuals. Scientists believe the global population is now estimated to be fewer than 2,500.

Zoe Sweetman, Assistant Team Manager of Parrots and Penguins at the zoo, said:

“It’s been a wonderful experience to watch the youngsters develop - from tiny, naked and helpless chicks when they first hatched to the huge, beautiful birds we see now. New mum Dresden and dad Royan have been model parents, gently preening and feeding the chicks with their enormous bills and guarding them closely.

“It’s an incredible achievement for the whole zoo team to have bred these iconic birds for the first time and delightful to share and celebrate the news with our colleagues at the Macaw Recovery Network in Costa Rica, who we work closely with to conserve these precious birds in the wild.”

Listed as endangered by the International Union for the Conservation of Nature (IUCN), the great green macaw is under threat from extensive habitat destruction and the conversion of its forest home for logging and agricultural land. Huge areas of forest have been converted to banana, pineapple and palm oil plantations or cleared for cattle ranching. The birds’ brightly coloured plumage also means they are high value on the illegal pet trade – the world’s fourth largest international crime – and many are trapped, captured and then sold on the black market.

Andrew Owen, Curator of Birds at the zoo, added:

“Global populations of the great green macaw have been decimated by more than 50% in just the last three generations. They are now considered very rare in four of the six countries that they are found. To have successfully reared these magnificent birds, just a few months after the parents arrived here in Chester, is therefore really wonderful news. We hope these stunning new arrivals will prove to be vital additions to the European endangered species breeding programme - which is working to prevent the extinction of these beautiful birds.”

Chester Zoo also supports and carries out parrot conservation activities in the Cerro Blanco Protective Forest in Ecuador, where a tiny population of great green macaws may still survive.