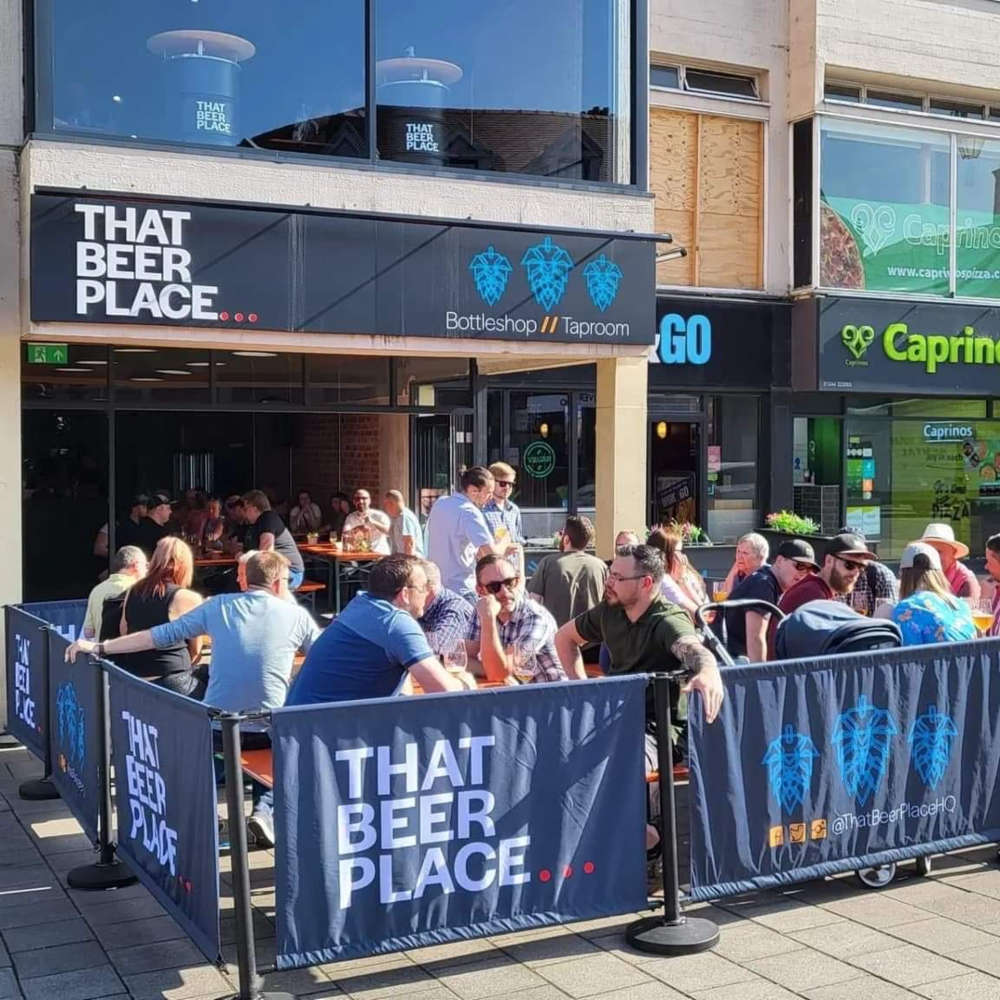 The owners of a popular Chester Market bottleshop and taproom have celebrated the opening of their new venue in Chester city centre.

After many months of anticipation, Chester Market’s popular beer destination That Beer Place has finally opened the doors of its new high street venue. The two-storey building based on Foregate Street was previously home to Berketex Brides and had been vacant for over three and a half years before the team behind That Beer Place snapped it up to become the new home for their bottleshop and taproom.

Owners Lisa and Dale Lord opened That Beer Place back in 2018 when Chester Market was all but a lost cause, but, alongside other traders, they helped turn around the fortunes of the Market to become crowned the UK's best small indoor Market by the end of 2019.

Described as "Beer and Cider heaven", the new Foregate Street venue which is open seven days a week will feature 10 ever-rotating beer taps, 4 cider taps, carrying over 400 bottled and canned beers and over 100 ciders, with cask beer lines being added in the coming weeks. The venue will host bespoke beer and cider tastings, as well as collaborations with breweries, cider makers and fellow indies. The first event in the diary will be a blind tasting event with Manchester-based craft beer superstars, Cloudwater on the 25th May, tickets are £25 and are available direct from the Foregate Street taproom.

A brand-new draught system, designed by Dale from the ground up, allows different beers to be served at style appropriate temperatures, and carbonation levels to be regulated. This means lagers will be served colder and more carbonated, whilst darker beers will be cool and with less 'fizz'. The aim is to bring the very best out in each style of beer and really showcase the style's unique characteristics.

A wine list curated by Wine School of Cheshire, small batch, artisan gins and other spirits will be available for the non-believers, but free "try before you buy" beer tastings from the beer taps are also available, underlining Lisa and Dale's firm belief that there's a beer out there for everyone.

Despite opening the new venue, Lisa and Dale have confirmed that the original unit in the current Chester Market will continue to remain open.

Speaking about the current Market and the opening of their new Foregate Street venue, Lisa said "We love the current market and another empty unit is not what people want or need to see. We want to be there until the end to help support our fellow traders that still have their businesses in there. Our opening weekend has been amazing! We've seen lots of familiar faces and met some lovely new people. The response and support from customers has been overwhelming. Other businesses on the street have been in to welcome us and wish us luck, which is fantastic. It already feels like home. I think we're going to love it here."

Co-owner Dale said "I'm really excited about having a tasting room that will allow us to run more events and have more fun collaborations with indies from all across Chester and beyond. The move onto the high street came as a shock to many as it was assumed that That Beer Place, along with many other favourites would simply move from the revitalised Chester Market into the new market as part of the Northgate development. The constraints the new Market's business model would have put on us would have meant we would have to cut back on many things we do today. Reducing our range, restricting our ability to run events and have outside collaborations, cutting back our wholesale and beer training operations and even limiting our online sales. Essentially, we'd have to stop being us and all at a very significant increase in cost. Why would we want to pay more to be so much less? It just didn't make sense. Going out onto the high street was our only choice."

The large new, dog friendly venue is over two floors, with a tasting room on the First Floor and the bottleshop and taproom for drink in and take away on the Ground Floor. They also have an alfresco licence and will be adding outdoor seating for drinks in the sunshine when the British weather permits. Full details of opening hours and special events can be found online at:

Pictured - Customers enjoying the alfresco seating area of the That Beer Place on Foregate Street in Chester.