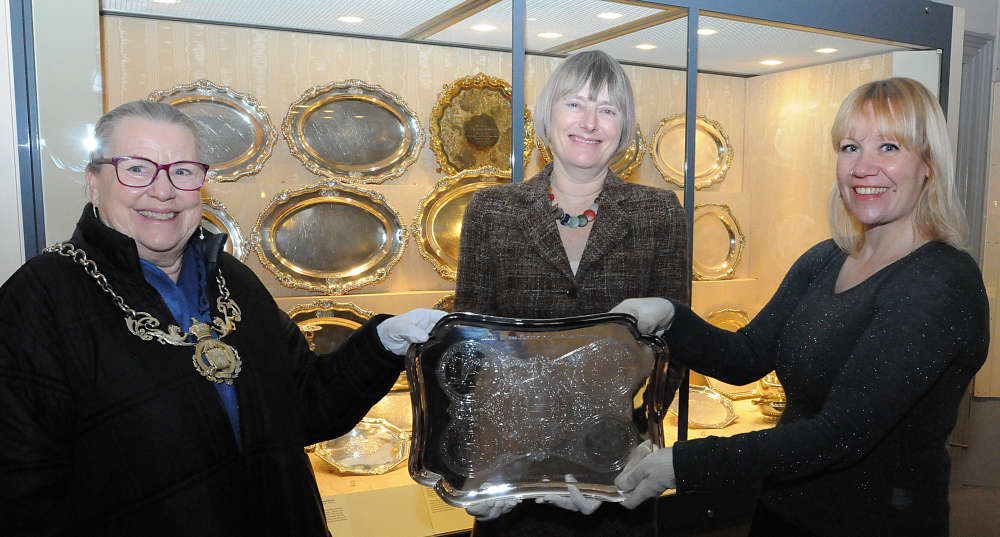 The Queen Anne silver salver, made by Anthony Nelme, dates from 1711. Gifted to the Grosvenor Museum in lieu of death duties, the salver is engraved with the seals of the County Palatine of Chester and was made for Chief Justice, Sir Joseph Jekyll.

Edward Harley, OBE, Chairman of the Acceptance in Lieu Panel, said: “Challenging times lie ahead for the cultural sector and so never has the Acceptance in Lieu of tax scheme been more important to museums throughout the country. I am delighted that this magnificent salver will be added to the Grosvenor Museum’s important silver collection and pleased that the museum will be using it as part of its ongoing focus to celebrate and explore its collection.

Sheriff of Chester, Councillor Jill Houlbrook said: “I am very pleased to welcome this latest piece of exceptional silver to the city’s Grosvenor Museum. Chester has a long tradition of excellence in making silver. From the early 1700s to 1962 it had its own Assay Office that essentially checked the purity of silver goods made in the region. Today Chester continues to be a regional hub for jewellery, with over 20 jewellers in the City centre.”

Dr Dora Thornton, Curator of the City of London’s Goldsmiths Company Collection, said: This object tells as story. It’s a document for the history of Chester which will help interpret that history for school children, residents and visitors. Thanks to the Acceptance in Lieu Schem, this fine seal salver can now be enjoyed by everyone as part of the national collection.”

Councillor Louise Gittins, Leader of the Council, said: “Chester’s outstanding silver collection will be further enhanced by this gift. I would encourage everyone who has not been to the Grosvenor Museum’s second-floor gallery to take a look at the city’s exceptional silver collection that contains many pieces from Chester-based master silversmiths from the Lowe and Richardson families.”

Dr Dora Thornton from the Goldsmiths Company subsequently visited jewellers, Lowe & Sons on Bridge Street Row, which is one of the oldest jewellers in the country having been trading from the same premises since 1804. Throughout the 19th and 20th century, the Lowe family were at the heart of silver in Chester and later even became involved in the hallmarking process. Appropriately, the last piece of Chester silver was created by Francis Lowe before the Chester Assay Office closed in 1962.

A wax stamp or seal was used like a signature on important documents for centuries.  By law, on the death of a monarch or the last holder of high office, silver seals were defaced or broken so they could not be used again.  By the 17th century, it became the custom for the last holder of the seals to commission a leading silversmith of the day to melt down the broken seals and incorporate an engraved version of the original seals on to a plate or salver (a flat surface lending itself well to the engraving of the seals).

The Grosvenor Museum is located in 27 Grosvenor Street, Chester and was opened in 1886. The Grade II listed building explores the history of Chester, including its art, natural history and what life was like during the Roman military occupation. It also contains a silver collection unrivalled outside London.  The Museum also contains a Period House with rooms from the 17th – 20th century.

The museum holds year-round exhibitions and events and has an inspiring schools service. Admission is free but a £3 per person donation is suggested.

About Goldsmiths Company, City of London

The Worshipful Company of Goldsmiths, more commonly known as the Goldsmiths Company was first established as a medieval guild for goldsmith trade. It is one of the Twelve Great Livery Companies of the City of London and received its first royal charter in 1327.

Today, the company is one of the few Livery Companies still to play a formal role in its ancient trade. The Goldsmiths' Company oversees The Goldsmiths’ Company Assay Office where objects made of precious metals are tested for purity, and then marked with an official symbol should they pass the necessary tests. The Goldsmiths Company is also responsible for checking the validity of British coinage.

Internationally recognised, the Goldsmiths’ Company has one of the finest collections of silver made in Britain, numbering some 8,000 examples from 1350 to the present day.

In 2012 the Company opened the Goldsmiths' Centre in Clerkenwell. The £17.5 million project, which includes workshops, training facilities and exhibition spaces, represents the largest direct investment in the trade made by the Company, and the product of a 700-year tradition.