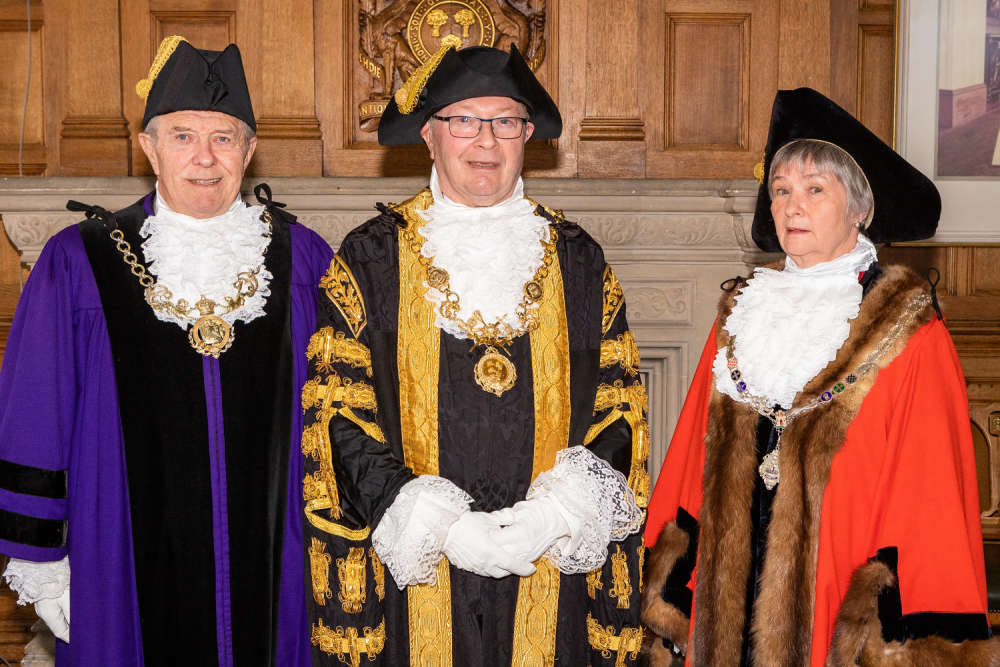 Councillor John Leather was invested as Lord Mayor of Chester at a ceremony at Chester Town Hall on Friday 20th May 2022.

Speaking after his inauguration, Councillor Leather said: “It is hard not to feel the weight of history when elected to an office which is eight or nine centuries old. I congratulate Martyn and Jill, the retiring Lord Mayor and Sheriff, for their stewardship of these ancient offices over the past year.

“Historically, one of the roles of the Mayor was to promote the city’s trade and businesses. Following the disruption caused by Coronavirus, we will revisit this theme.   I will look for opportunities to promote tourism, especially that related to the arts and the city’s heritage, and to recognise those working in this profession”

The Lord Mayor’s Charity will be supporting three local charities which reflect both these objectives  and the retiring Lord Mayor’s theme of inclusivity.  The charities which he will support during the year are Older People Active Lives (OPAL) Services, the Chester Mystery Plays and the Fallen Angels Dance Theatre.

The Chester Mystery Plays are performed every five years and attract an international following, OPAL Services has several initiatives to combat social isolation among older people, particularly in rural areas, and Fallen Angels Dance Theatre uses dance as a medium to support those recovering from addiction of all types.

The Lady Mayoress, Mrs Heather Leather said: “Chester is my home city, having been brought up in Ellesmere Port, and I am looking forward to supporting John in his role as Lord Mayor of Chester.”

The Lord Mayor thanked Reverend Adam Friend, from St Andrews Church in Tarvin, for kindly agreeing to accept the role of Chaplain to the Lord Mayor.  He went on to thank him and his parishioners for setting up a highly effective support network at the start of lockdown.

In conclusion the Lord Mayor said: “We will promote the health and welfare of citizens and visitors to Chester, support the educational establishments, businesses and commercial enterprises of the city, and promote Chester as a place to live, work and visit.”

He has been a Cheshire West and Chester councillor for Tarvin and Kelsall Ward since 2011.

Heather Leather was born in Cheshire and lived in Ellesmere Port

They have three adult children and a grandson.