Mark Watson: How You Can Almost Win - In Chester 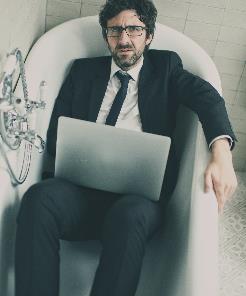 Comedian and safety-lover Mark Watson will be performing in Chester on 18th September, with his new show "How You Can Almost Win".

So – what happens when you send a man prone to considerable anxiety, with multiple phobias and a history of poor self-esteem on Celebrity Island with Bear Grylls? Mark found out and is now sharing his findings in a motivational talk (but with many jokes, this is Mark Watson after all).

Mark is one of the country’s most beloved and critically acclaimed live comedians, and has had a long and notable Fringe career since he was nominated for Best Newcomer at the 2005 Perrier Awards, before being awarded the 2006 if.comedy Panel Prize for performing one of his now-legendary marathon stand-up shows. Away from Edinburgh, he’s taken home the Time Out Critics Choice Award, been nominated for a Barry Award from the Melbourne Comedy Festival, as well as winning Best Show at both Sydney and Adelaide.

In 2019, Mark released Mark Watson’s Comedy Marathon about the London Marathon on Audible. He launched it with the Watson trademark – a 26.2 hour long show. One hour for every mile of endurance running…luckily this new show won’t give you blisters but it will cause your laughing muscles to ache. 2017 saw Mark write songs, hurl coconuts and beg piggy-backs as part of Dave’s BAFTA-winning Taskmaster. In a less pleasant TV engagement, he lost almost three stone and faced a crippling lifelong phobia during a much talked-about stint on The Island with Bear Grylls (C4) which this show is based upon. Mark has also regularly appeared on BBC 2’s Never Mind The Buzzcocks, and Mock the Week, BBC 1’s Would I Lie To You and Have I Got News For You. He has performed stand-up on BBC 1’s Live At The Apollo, Michael McIntyre’s Comedy Roadshow and Channel 4’s Comedy Gala and was the star of Dave TV’s Road to Rio, as well as the host of BBC 4’s We Need Answers. He’s won Celebrity Mastermind and Celebrity Pointless and he once dressed up as a badger for terrible Sky One show Wild Things.

As well as his TV and live work Mark has been a Radio 4 mainstay for a decade, with his various series Mark Watson Talks A Bit About Life (a new series coming this Autumn), Mark Watson Makes The World Substantially Better and Mark Watson’s Live Address To The Nation. For the past two years he’s hosted the final of the BBC New Comedy Award – one of the only comedy shows on the network to go out live.

On top of his comedy stardom Mark has seven books under his belt. Since last Edinburgh, his graphic novel Dan and Sam has been optioned as a feature film by Steven Spielberg’s Amblin Entertainment and is now in development.

What the press have said about Mark Watson:

"Quite unlike anything else I’ve seen in almost 20 years of covering the Fringe...witty, warm, perfectly judged"  ★★★★★Telegraph

“Always displays an innate understanding of what the audience wants” ★★★★ Chortle