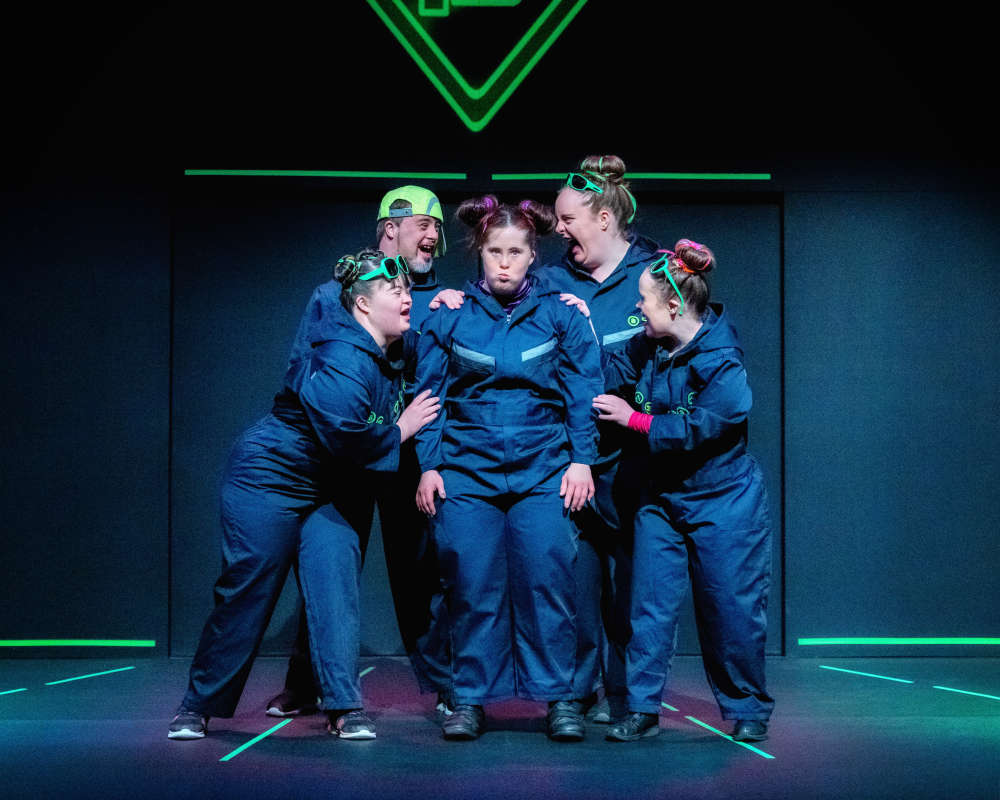 Set in a future world, #Unit21 challenges and parodies the set of social rules thrust upon us when we become an adult, a universal issue told from the learning-disability perspective. Featuring an ensemble of nine actors with learning-disabilities and the voices of award-winning comedians Iain Stirling and Amy Webber, the show sees character Ally celebrating her 21st birthday. But the night descends into a haze of expectations versus reality.

“When Dark Horse celebrated its 21st birthday four years ago, #Unit21 developed out of explorations around what happens when a person turns 21,” explains director Amy Cunningham. “What are the expectations? What are the rules? The ensemble spent months interviewing adults and young people from the learning-disabled community and beyond, using this research to inspire the development of the show and the live polling that audiences can access on their mobile phones. Sci-fi films and dystopian fiction were used as anchors to explore movement, creating a grotesque meets Bob Fosse physicality that the ensemble maintain throughout. The priority of #Unit21 is to display a new and progressive form of theatre that uses animation to make concepts more accessible to people with learning-disabilities, whilst also creating stunning visuals. The ensemble has collaborated with games designer Richard Littlewood on both electronic score and animation.

“This is a show that unites all adults in their own ordinary and extraordinary successes and failures. It is dark, it is empowering, and it is absolute permission to be the beautifully unique adult that you are (not that you ever needed it).”

Rooted in physical storytelling, Dark Horse promises a bold and entertaining show accompanied by integrated animation and captioning, an original electronic soundtrack, and the option to use your phone during the interactive live poll throughout the show.

As part of #Unit21, Dark Horse will release a series of short films on YouTube over four weeks in January and February. The series is called #FaceTime with each film platforming learning-disabled voices and giving a unique and relatable perspective on adulting.

The #Unit21 tour starts at Lawrence Batley Theatre in Huddersfield, and continues to The Lowry in Salford, Chroma Q in Leeds, Junction Goole and Storyhouse in Chester.