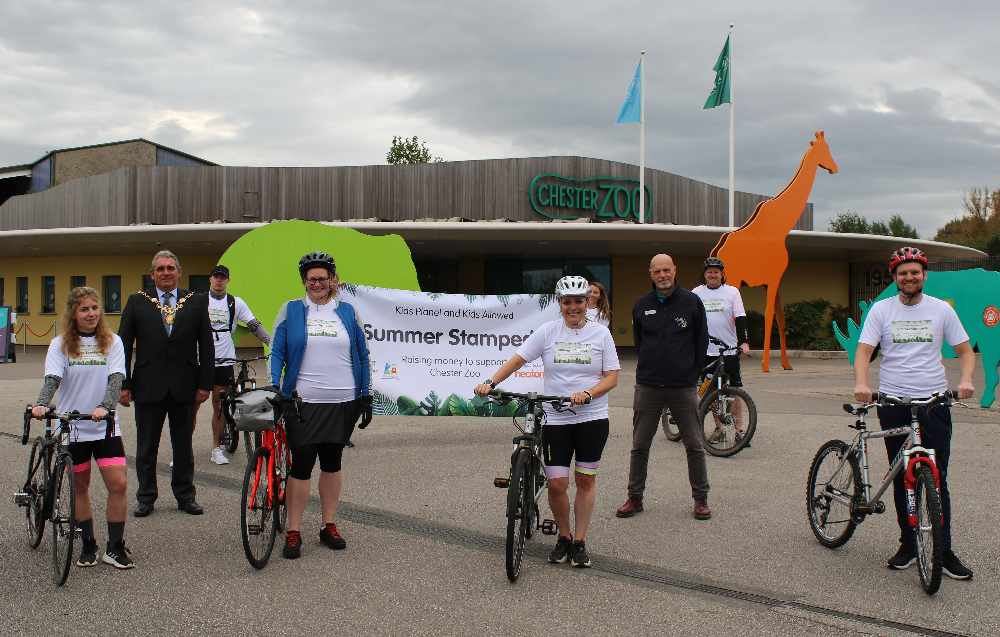 Twelve members of staff from Kids Planet Head Office embarked on a 50 KM bike ride from Chester Zoo to their office in Lymm cheered on their way by Chester Zoo’s very own CEO, Dr Mark Pilgrim and the Lord Mayor of Chester, Councillor Mark Williams.

Riding through some pretty tough terrain, including more than a few hairy hills, the team all completed the route an hour earlier than planned. Fortunately, the children at Lymm nursery got an update and were there in all their zoo animal finery to welcome the weary cyclists home with lion roars and monkey chants, flags and banners.

Throughout the summer, staff, children and their families at Kids Planet (which now includes Kids Allowed) have been raising thousands of pounds to support the UK’s most popular charity zoo, Chester Zoo, due to its significant losses since Covid-19 and its drastic restrictions on visitors for the foreseeable future.  The number one childcare company for quality in the UK is hoping to raise over £20,000 to adopt as many animals as they can. To achieve this 7,000 children (aged two to five) have been taking part in sponsored walks, hops, jumps or leaps with the aim to cover a collective 1700 miles – the sum total of all 52 nursery’s individual mileage to Chester Zoo.

Kids Planet CEO Clare Roberts, along with her sister, Lucy Kaczmarska, Childcare Director have always been avid supporters of Chester Zoo – not only as an attraction for their own children but also for its conservation campaigns. As Clare explains:

“As soon as we heard about the plight of Chester Zoo we wanted to help. We know how much the zoo means to our families and they have been incredibly generous with their support, as have our staff. Our name, Kids Planet, reminds us all that children are the most important considerations when we look at the impacts, good and bad, on our world today. The animal kingdom and their survival, or threatened extinction, can teach all of us a thing or two about sustainability and environmental responsibilities. We also believe children should learn the importance of giving and experience the wonderful feelings that it can instil to do something for the good of others. But overall, we encourage learning through play and what better way to encourage our children to take an interest in the world around them.

“It’s been a refreshing change for us to don our cycling shorts and head out all day in the fresh air. We really enjoyed it – some more than others when it came to the hills – it was such a delight to be cheered off by the Lord Mayor and Chester Zoo’s CEO Dr Mark Pilgrim and cheered home by the children. We’ve also added some miles to our target as well as a considerable boost to our crowdfunding page. Thank you to everyone who has supported us to date, your kindness has been remarkable. We are proud to support Chester Zoo and hope that our efforts can help them through these difficult times and look forward to continuing our relationship with them through our animal sponsorship programme.”

The Lord Mayor, Councillor Mark Williams, was delighted to be involved in the send-off and said “it’s great to see companies like Kids Planet support worthy causes within Chester. I was a keen cyclist in my youth and was pleased to see people having a day out on their bikes raising money for a good cause. The Zoo is one of our finest treasures and is enjoyed by millions of people from all over the world. We hope it won’t be long before we can look forward to a brighter future for them.”

Mark Pilgrim added “we’re really proud of everyone at Kids Planet who have done so much to help our cause. It’s really boosted our morale at such a difficult time for our great charity zoo. I also think it’s so important to encourage children to appreciate animals, nature and the environment and to learn about the world around them and it’s wonderful that the young children at Kids Planet are encouraged to do so as part of their everyday learning.”

Local families can contact the nursery or Kid Planet office to join in on the many fundraising early years-child-centred activities across the NW and the Midlands. To make a donation or get involved please go to the Kids Planet Summer Stampede crowdfunding page. You can also join the Kids Planet team on Facebook and Twitter. To find out more details about the Kids Planet nurseries in your area you can visit the Kids Planet website.

Kids Planet was founded in 2008 by John Hoban and his daughter, Clare Roberts, after Clare was unable to find the quality of childcare she wanted for her own children and the flexibility around her work.  Clare’s sister (John’s other daughter) Lucy Kaczmarska is a trained early years and primary school teacher and joined the family business as Childcare Director in 2013.

Kids Planet is the number one childcare provider for quality in the UK and, with its current number of nursery settings standing at 52 (including 12 Kids Allowed nurseries which were acquired in January 2020), it is also the third largest group in the UK.

The business currently provides quality childcare for 7,000 children and employs 2,000 childcare staff across the settings and a further 65 at head office in Lymm, Warrington.

Whilst the company is largely based in the North West and the Midlands it has plans to extend its quality offering across the UK and overseas in the near future.