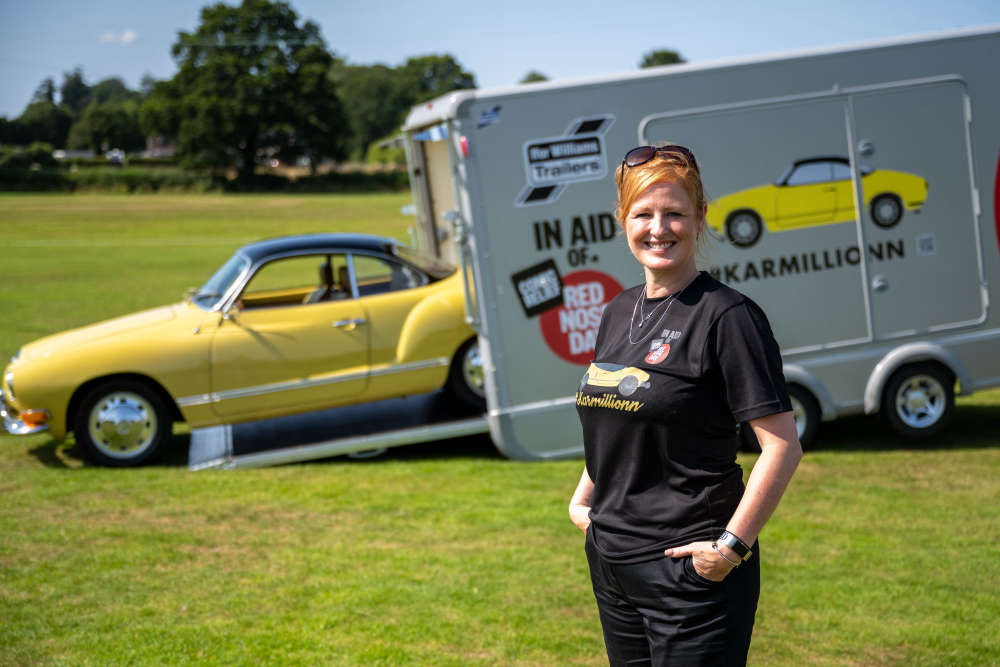 A loyal fan of radio star Chris Evans is revving up to meet her hero – thanks to a special antique car and a trailer maker from Flintshire.

Deeside-based Ifor Williams Trailers came to the rescue after Nichy Williams was chosen to have the honour of helping open the radio and TV star’s CarFest North event.

The iconic Welsh firm have provided one of their famous car transporters to take her treasured 1970 VW Karmann Ghia on the 300-mile round trip to the festival.

Nichy became smitten with  the car after winning it in a prize draw during Comic Relief earlier this year.

It  was generously made available by Evans and CarFest, who like Nichy is an avid motoring enthusiast, with entrants to the draw simply having to donate £10 to Comic Relief on the night to be in with a chance of keeping it.

Nichy, from the small village of Ponthir in Torfaen,  struck the jackpot out of the thousands of hopefuls and a friendship has started to bloom between the former Top Gear host and the officer with Gwent Police.

She has been interviewed by him on Virgin Radio and the pair are set to meet in person for the first time over the weekend at CarFest North in Bolesworth, Cheshire.

Nichy and her car, which the family call 'Honeybee' due its yellow and black colouring, will have the honour of opening the event that regularly attracts thousands of visitors.

Although Honeybee is roadworthy and has been venturing around the Ponthir area, the demanding 150-mile journey from South Wales to Bolesworth is considered too much for such a vintage vehicle.

Nichy is delighted about the kind gesture from Ifor Williams Trailers, as she still tries to comprehend the enormity of the events of recent months.

"Getting the car was all down to Chris' generosity," said Nichy, 49.

"After I won the car I asked if I could thank him, to send him an email or something. The next thing I knew I was appearing on his radio show.

"He is someone I have followed for a long time and have enjoyed listening to.

"But I never thought I would get the chance to chat to him like that. We had such a laugh together.

"When I put the phone down after we'd finished I was in shock. I just couldn't really comprehend what had happened.

"To then be invited to open CarFest was really unbelievable."

Created by Evans, CarFest is a leading family fundraising festival and it has helped raise millions of pounds for children's charities.

Nichy and her family will be topping the guest list at CarFest North this weekend and are then due to do likewise at CarFest South in Hampshire in August.

They were also set to grace the new Retro CarFest event, but that was cancelled due to the Covid-19 pandemic.

But Nichy, her husband Christian and their son Ellis, 11, can look forward to CarFest North after Ifor Williams Trailers generously offered the use of one of its car transporters to transport Honeybee.

"I really want to express my gratitude to Ifor Williams Trailers for what they are doing," said Nichy.

"I can't thank them enough for their generosity.

"Without them it would have been very difficult for us to take the car to the event.

"I'm really excited about going up there for CarFest.

"I can already feel butterflies about what we will be doing there."

Although Evans has kindly given away his vehicle, he has challenged Nichy and her friends from Ponthir to drive the fundraising bid just a little bit further.

With the draw for the car helping raise in excess of £900,000 for Comic Relief, Evans has laid down the challenge for Nichy to take the final total above the £1 million mark.

This has led to the creation of the Karmillionn challenge, as villagers from Ponthir strive to raise the remaining £96,000 to make it to the magical million.

"We feel very fortunate about what Chris has done," said Nichy.

"For me to spend £10 and to get this car does not really make any sense, so I feel I have to give something back.

Vintage vehicles are in Nichy's blood, as her late father, Les Gardner, was passionate about restoring classic cars.

Nichy has followed his lead and long been interested in motoring, with a third generation of the family now getting in on the act.

Her son Ellis is taking a keen interest in Honeybee, which has quickly become a treasured part of the family and is treated as female.

"I have always loved my cars. Christian isn't very interested in them but Ellis seems to be the same as me," said Nichy, who has also two older adult children in Carys, 26 and Iestyn, 24.

"I just wish my dad was still here, as I know how much he would have enjoyed this.”

Ifor Williams Trailers spokesperson Samantha Williams said: “When the call came through, we were only too pleased to help Nichy transport this wonderful car to the festival.

“Charity fundraising has taken a real battering as a result of the pandemic and Comic Relief will ensure that the additional money raised will be put to very good use.”

Nichy has expressed her thanks to fellow fundraiser Dave Hawke, whose enquiries led to the generous offer being made by Ifor Williams Trailers.

"The support of Ifor Williams Trailers helps make it all possible," said Dave.

"They could not have been more helpful and to have such a respected organisation as Ifor Williams Trailers involved involved helps add a bit more professionalism to what we are doing.

"Nichy and Christian are a lovely couple and it's fantastic that this has happened."

Fundraisers also wish to express their thanks to Parrys Estate Agents, particularly Heather Parry who sponsored a gazebo for the trip.

Nichy added: “I would also like to thank Ashley Fellows and Michael Rewaj from VW Sinclair Newport for showcasing the Karmann Ghia and for taking such good care of her whilst in their beautiful showroom.”

Anyone interested in supporting the Karmillionn challenge should visit:

Pictured - The car’s the star...Nichy Williams with her treasured 1970 VW Karmann Ghia on her way to hook with Chris Evans.