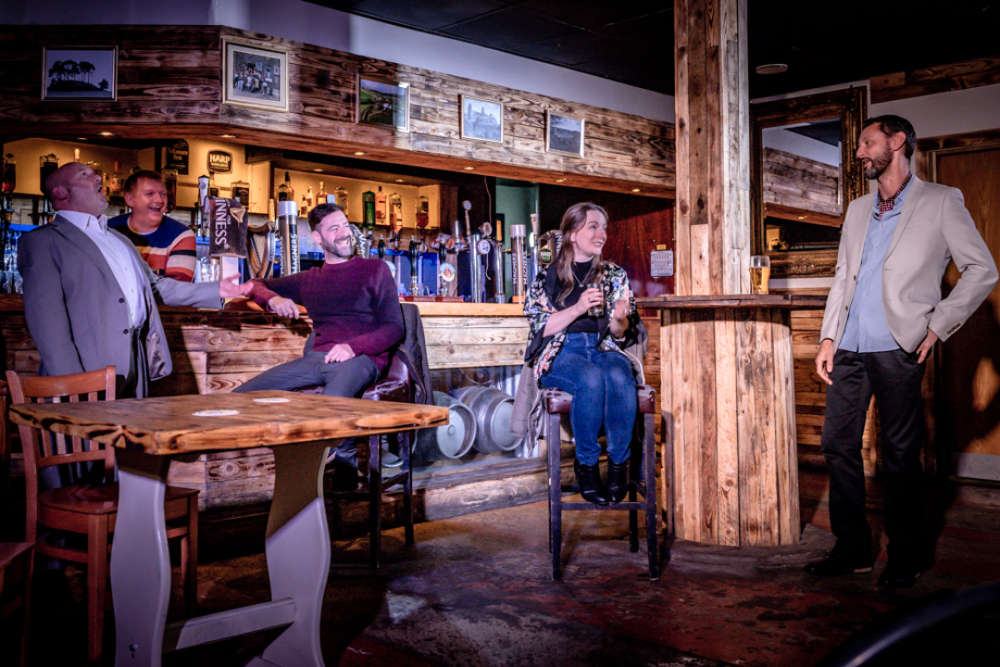 An extra date has been added for the production of an award-winning play currently being staged at The Live Rooms in Chester due to the demand for tickets.

Due to the high demand for tickets and with the original three-night run of the play sold out, Chester based theatre company Against The Grain will now stage an additional performance of "The Weir" by Conor McPherson at The Live Rooms on Saturday 13th August at 7.30pm. The play marks a welcome return to the popular city centre venue for the company, which previously staged of co-founder Mark Newman's twisted comedy "Mr Dumpling" at The Live Rooms last year.

A shadowy tale delving into the dark corner of human lives, "The Weir" draws on tales from Irish folklore and the supernatural as its inspiration and is set in a small pub in a remote part of rural Ireland where, over the course of an evening, locals gather to sit, drink and tell tall tales.

As the beer and whisky flows, the arrival of a young stranger, haunted by a secret from her past turns tales of folklore into something more unsettling. One story however is more chilling and real than any of them could have imagined. The play tells the story of the villagers and the local myths and legends in their tightknit community with typical Irish warmth, wit and a good measure of dark humour.

Speaking about adding the extra night, Against The Grain co-founder Paul Crofts said "The original three-night run of the play quickly sold out and we've had so many people asking for tickets that we're pleased to have able to add an extra performance on Saturday 13th August. The cast and crew are certainly all up for it and the feedback from the audience on our opening night has been brilliant. The team at The Live Rooms have been superb to work with and we're delighted to be able to give people another opportunity to see the play."

Written in 1997, the play was first staged at London's Royal Court Theatre before transferring to Broadway. It won an Olivier award for best new play in 1997 and was voted one of the most influential plays of the 20th Century in a poll conducted by The National Theatre. The Weir is directed for Against The Grain by company co-founder Marian Newman.

As a playwright and screenwriter, Conor McPherson has won several awards including the George Devine Award, Stewart Parker Award and an Olivier Award. His credits for theatre include The Veil (National Theatre), The Dance of Death (Trafalgar Studios), The Night Alive (Donmar Warehouse, Atlantic Theater, New York) and The Girl from the North Country (Old Vic).

Speaking about staging the play,  Director Marian Newman said "The Weir has been a joy to direct, the cast and I have learned a lot about Irish Folklore and this has brought to life the characters and their lives in this little rural village.  Make no mistake, these lovely characters created by McPherson are delightful, interesting and very human and in no way mundane.  The audience, I hope, will be moved by their stories and relationships and just a little spooked.  The Live Rooms venue is ideal for us to create an intimate acting space, where the audience can sit and feel like they’re in the pub, or just sit back in their seats and enjoy the stories."

Full details of the additional performance of "The Weir" can be found at:

Against The Grain is Chester based theatre company founded in 2019 and comprises a small number of actors, writers and directors all of whom have been involved in theatre in the Chester and North Wales area over the last 20 plus years. The company was founded by Mark Newman, Marian Newman, Stuart Evans and Paul Crofts. The company's debut production in 2019 was "Worldly Women" by Jan Bengree, a collection of monologues written especially for the company and performed as part of the Storyhouse Women's Festival in Chester. The company has subsequently staged productions at venues including Chester Little Theatre, Theatr Clwyd and The Live Rooms, including new writing by co-founder Mark Newman.

Pictured - The cast of "The Weir" in scenes from the play which will run for an extra night at The Live Rooms in Chester.