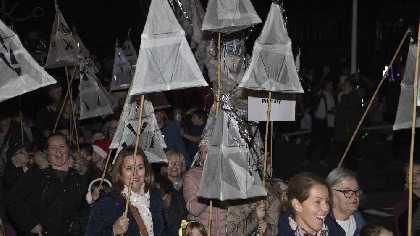 Activities during the evening include the Lantern Parade and puppets, Ellesmere Port Round Table with Father Christmas and his sleigh, Brio Bear, children’s rides, stalls, food and local dance group First Footers.

Christmas officially starts in Ellesmere Port, with the Mayor of Ellesmere Port, Michael Edwardson leading the countdown, the Mayor said: “A very happy Christmas to Ellesmere Port. I’m really looking forward to starting the celebrations in the Port. A particular thanks to all the children who will be parading with their hand made lanterns.

“Look out for the Christmas activities over the next few weeks including Father Christmas returning to his grotto in the market.”

School children from local schools; Christchurch, Sutton Green, St Marys of the Angels, Whitby Heath have been taking part in workshops led by artist Russell Kirk to make their own lanterns for the parade.

Ellesmere Port will be the home to Cinderella, the Christmas pantomime which runs from the 14 to 24 December at the Civic Hall