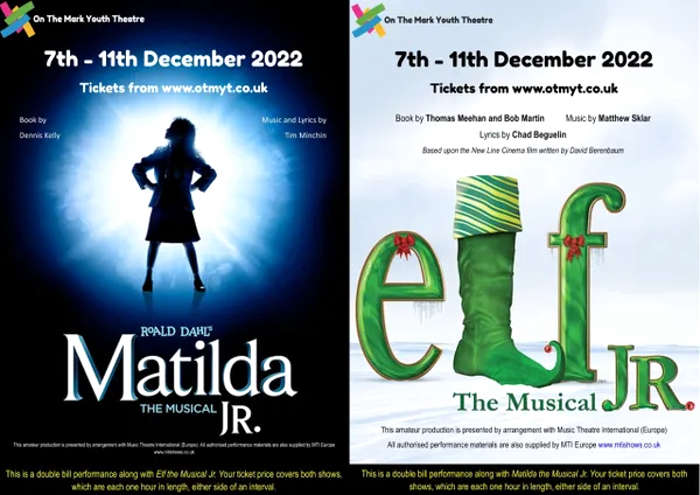 Rehearsals are in full swing as budding musical theatre stars of the future at a Chester based Youth Theatre prepare to stage a double bill featuring two popular musicals ahead of the festive season.

On The Mark Youth Theatre (OTMYT) will stage Matilda Jr. The Musical and Elf Jr. The Musical at Christleton High School from Wednesday 7th - Sunday 11th December. The specially adapted shows are both an hour long and will be staged in a double bill with a short interval in between.

Following on from the success on previous OTMYT shows including Godspell, The Addams Family and Whistle Down The Wind, the special double bill will feature a cast of 70 talented young performers and an impressive 180 costumes. The title role of Matilda will be shared by two students - Takara (pictured) and Elisha. The roll of Buddy the Elf will be played by OTMYT student Joe.

Speaking about the shows, OTMYT's Artistic Director Simon Phillips said "Matilda Jr, based on Roald Dahl's much loved children's book is a gleefully witty ode to the anarchy of childhood and the power of imagination. This story of a girl who dreams of a better life and the children she inspires will have audiences rooting for the "revolting children" who are out to teach the grown-ups a lesson.  Matilda has astonishing wit, intelligence... and special powers! She's unloved by her cruel parents but impresses her schoolteacher, the highly loveable Miss Honey. Matilda's school life isn't completely smooth sailing, however – the school's mean headmistress, Miss Trunchbull, hates children and just loves thinking up new punishments for those who don't abide by her rules. But Matilda has courage and cleverness in equal amounts, and could be the school pupils' saving grace.

As part of this special double bill, we are also delighted to be staging Elf Jr. which is based on the beloved festive film. The story follows Buddy the Elf in his quest to find his true identity. A young orphan who mistakenly crawls into Santa's bag of gifts and ends up in the North Pole, the would-be elf grows up completely unaware that he is actually a human, until his enormous size and poor toy-making abilities cause him to face the truth. With Santa's permission, Buddy embarks on a journey to New York City to find his birth father and discover his true identity. Faced with the harsh reality that his father is on the naughty list and that his half-brother doesn't even believe in Santa, Buddy is determined to win over his new family and help New York remember the true meaning of Christmas. What better way to start the festive season than with these two fantastic musicals performed by our talented young cast, two shows for the price of one, what's not to like!"