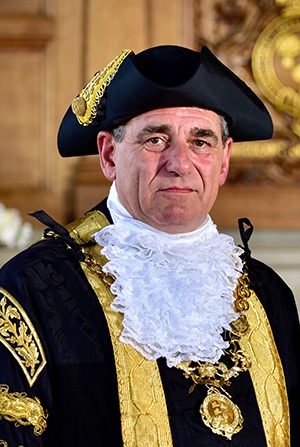 The Lord Mayor of Chester has written to Buckingham Palace expressing condolences on behalf of the City of Chester following the passing of His Royal Highness The Duke of Edinburgh.

In his letter, Cllr Mark Williams said: “While we join with the rest of the country in mourning, we are also taking this opportunity to reflect on the accomplishments of His Royal Highness The Duke of Edinburgh, and pay tribute to his incredible legacy, lifetime of public service and unwavering commitment to our country.”

“We are grateful for His Royal Highness The Duke of Edinburgh’s contributions to the future of people both within the United Kingdom and globally through his Naval service, service as consort, and support or patronage of hundreds of charities, associations, bodies and organisations, especially for those involving British industry, engineering, research, the environment and active lifestyles. These are also causes close to the heart of many people in west Cheshire.”

“He will also always be remembered as the founder and long-time chairman of the Duke of Edinburgh Award, which has developed the skills of and encouraged the achievements of thousands of young people in more than 140 countries.  Thousands of local children have participated and benefitted from the programme which was established in 1956.”

“His Royal Highness The Duke of Edinburgh visited our City on a number of occasions. He joined Her Majesty The Queen in 1957 when they opened Chester’s former County Hall, and in 1967 paid a visit to Cheshire Police HQ.  Further visits took place in 1981, 1992 and 1996, and in 2012 he joined Her Majesty The Queen at Chester Zoo, where she opened the Diamond Jubilee Quarter as part of her jubilee celebrations.”

“He, alongside many other members of the Royal Family, also came to Chester for the wedding of Lady Tamara Grosvenor, the eldest daughter of The Duke of Westminster, and Edward van Cutsem at Chester Cathedral in November 2004.  An event which is well remembered by many local residents.”

“We were fortunate to have shared in His Royal Highness The Duke of Edinburgh’s extraordinary life and accomplishments. He will be missed profoundly.”

Cheshire West and Chester Council has opened an online book of condolence that people can contribute to at: www.tolbc.com/ChesterHRHPPTributes.  Anyone without access to the internet can contact the Council’s Civic team on, tel: 01244 977074 who will add in your message.

In addition, physical books of condolence will be available at:

Members of the public will be asked to bring their own pen where possible.

People may also wish to consider supporting one of the many charities, associations or organisations that His Royal Highness The Duke of Edinburgh was linked with or a patron of. You can search for these here: https://www.royal.uk/charities-and-patronages.

Flags will be lowered to half-mast at Council buildings during the mourning period and a service of commemoration will also be held at Chester Cathedral.  Due to COVID-19 restrictions, this service will be streamed online with a small invited congregation.