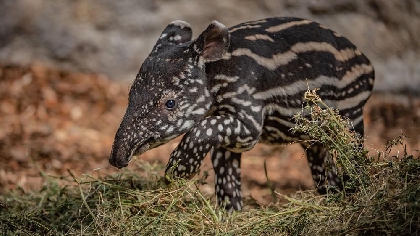 The calf, which has been revealed as a boy, arrived to proud parents Margery (7) and Betong (6) on Thursday morning (18 July).

Keepers at the zoo are now asking the public to help them to give him a name.

Baby tapirs have distinctive coats when first born, made up of a series of spots and stripes to help camouflage them on the forest floors in their native South East Asia. This pattern will slowly change over the first six months to the unique black and white pattern of their parents.

Around half of the world’s Malayan tapirs have been lost in the last 40 years, with fewer than 2,500 estimated to remain in across Malaysia, Sumatra, Thailand and Myanmar. Hunting, illegal logging and mass deforestation as land is cleared for unsustainable palm oil production are blamed for the decline in numbers.

Conservationists have hailed this latest birth at the zoo with the species listed as endangered on the International Union for the Conservation of Nature’s (IUCN’s) Red List of Threatened Species.

Sarah Roffe, Team Manager, said: “It’s wonderful to hear the pitter-patter of tiny, spotty Malayan tapir feet again for only the second time ever in the zoo’s long history.

“Mum Margery is ever so good with the baby. She’s very attentive but also gives him chance to explore and find his feet.

“The precious calf is another big boost for the international breeding programme, which is working to ensure the already endangered species do not become extinct. In the wild, the Malayan tapir population has crashed in recent times, largely due to the wide-spread conversion of their forest habitat to palm oil plantations. If people want to help this wonderful species then we’d urge them to demand that the palm oil contained in the products they use is from sustainable sources.”