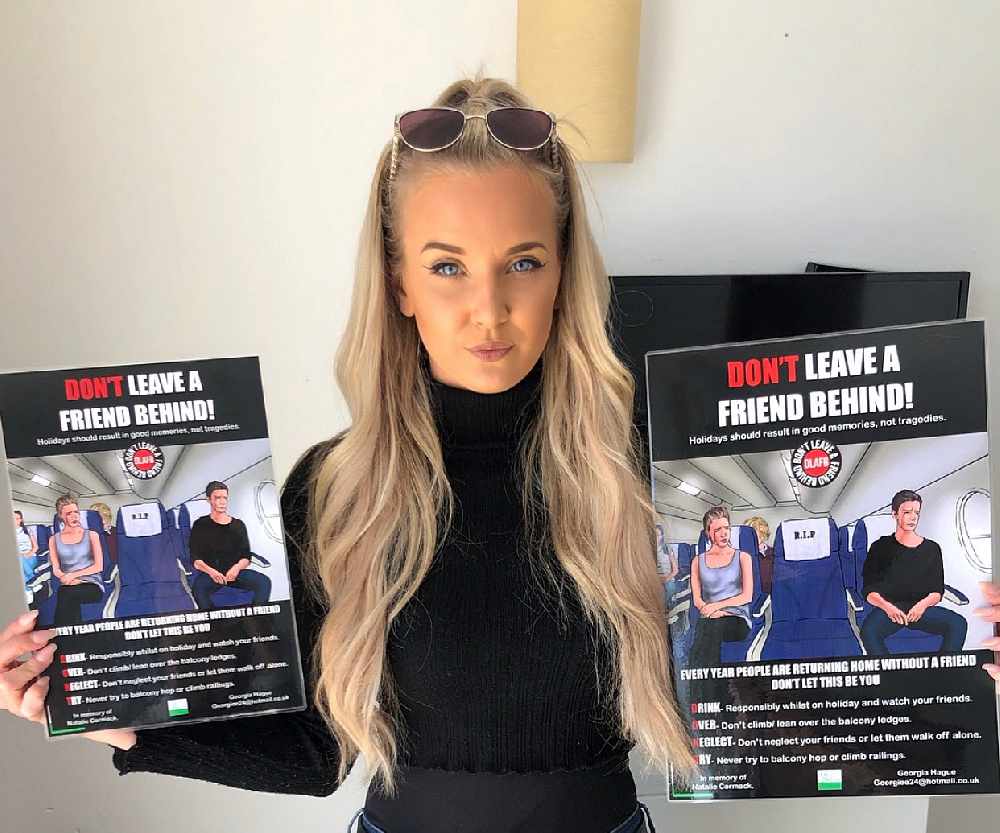 A Wrexham woman whose friend fell to her death, from a Magaluf apartment block, has been named on the Queen’s Birthday Honours list after campaigning to raise awareness of balcony falls.

Georgia Hague, 26, from Wrexham, has been awarded a British Empire Medal after working with the Foreign Office to help warn tourists to the dangers.

The former Balearic bar worker was left grief-stricken when her friend Natalie Cormack plunged to her death in Magaluf, Mallorca in April 2018.

A further two Brits – Tom Hughes, 20, and 18-year-old Thomas Channon, both from Wales – died at the same spot in separate incidents after falling from the so-called ‘walkway of death’.

Georgia’s campaigning led to the owners of the Eden Roc apartment complex being forced to carry out safety improvements.

And her hard-hitting posters are credited with a reduction in balcony falls involving British tourists.

Delighted Georgie – now working as a Treasury Advisor for a bank – said: “I am extremely grateful and humbled to have been recognised for my efforts in Mallorca.

“I was so surprised to get the email through saying I was being honoured. I’m used to people from the Embassy contacting me so just thought it was something about more posters.

“My mum is so proud of me because she knew how hard I worked on this when I was out there and how the deaths had affected me.

“If the campaign helped to save just one life, then that means the world to me.”

Hertfordshire-born Georgia, originally from Welwyn Garden City, was nominated by officials from the Foreign, Commonwealth & Development Office (FCDO) and receives her award ‘for services to the British community in the Balearics’.

She spearheaded her own ‘Don’t Leave a Friend Behind’ campaign before supporting a British government ‘Stick with your mates’ consular campaign, which saw a video featuring Georgia reaching millions of young people, helping to prevent further deaths and accidents.

Georgia explained: “I was out doing my first season and Natalie was one of the first people I’d got to know out there. She died within weeks of me meeting her and it really affected me. She was only 19.

“The worst thing was that this was not shocking news to many Magaluf residents and workers who had been on the scene long before me.

“A lot of people would just shrug and say, ‘Oh, yeah, balcony falls happen every year’. They were very kind of blasé about it as if it was just one of those things. The attitude was that she was far from the first and wouldn’t be the last.

“Then, only a couple of months later, I met two young lads, who were actually from Wrexham, where I live now. They met another Wrexham boy out there, called Thomas Hughes. Thomas actually died on his first night and I had actually met him very briefly to say ‘Hello’.

“When I saw the two boys the following night and was asking ‘How was your night?’ and they were just devastated and said ‘Do you remember that boy that we’d met? He was the person that fell and died’.

“He had actually fallen and died at the same spot Natalie was killed, so that was hugely upsetting. I started thinking ‘Something really needs to be done’. I still wish I’d had a chance to speak to him that night about what had happened to Natalie. He might have been alive today if I’d had a chance to warn him.”

She added: “I was frustrated that nothing was being done to prevent this happening and people were just burying their heads in the sand.

“I couldn’t accept it and was not going to slip into that mentality. You see lots of adverts on TV about drink driving, look both ways when you cross the road, smoking… but there was nothing at all about balcony falls.

“These were not even people mucking about or being silly. A third victim Thomas Channon died in the same spot the same summer. It was a small walkway with no barriers that was all bushy so you couldn’t even see you were seven storeys up.

“All the journalists I took up there to that drop were like ‘Oh my God. What a death trap’.

“In the majority of cases of people falling to their deaths, they are on their own. If they had had friends with them at the time, it is very unlikely it would have happened.

“The Embassy says my ‘Don’t Leave a Friend Behind’ campaign has had a positive impact. I think there was only one fatality last year. A lot of tragedies can be avoided if mates stick together.”

Georgia initially self-funded her campaign after designing her poster before Calvia Council offered to pay for a print and distribution run.

Coronavirus travel restrictions have seen Georgia return to the UK to settle in Wrexham with plumber partner Michael Hencher.

But she is keen to continue her campaigning once holiday resorts return to normal.

She said: “I’d love to expand the campaign to other holiday resorts eventually to hopefully save more lives. Receiving this award has really inspired me to keep pushing.”

Sir Philip Barton, Permanent Under Secretary at the Foreign, Commonwealth and Development Office said: “I congratulate everyone receiving an honour and thank them for their hard work and years of service.

“Britain’s impact around the world depends on exceptional people like those recognised in this year’s Queen’s Birthday Honours. We are grateful for their outstanding contribution.”