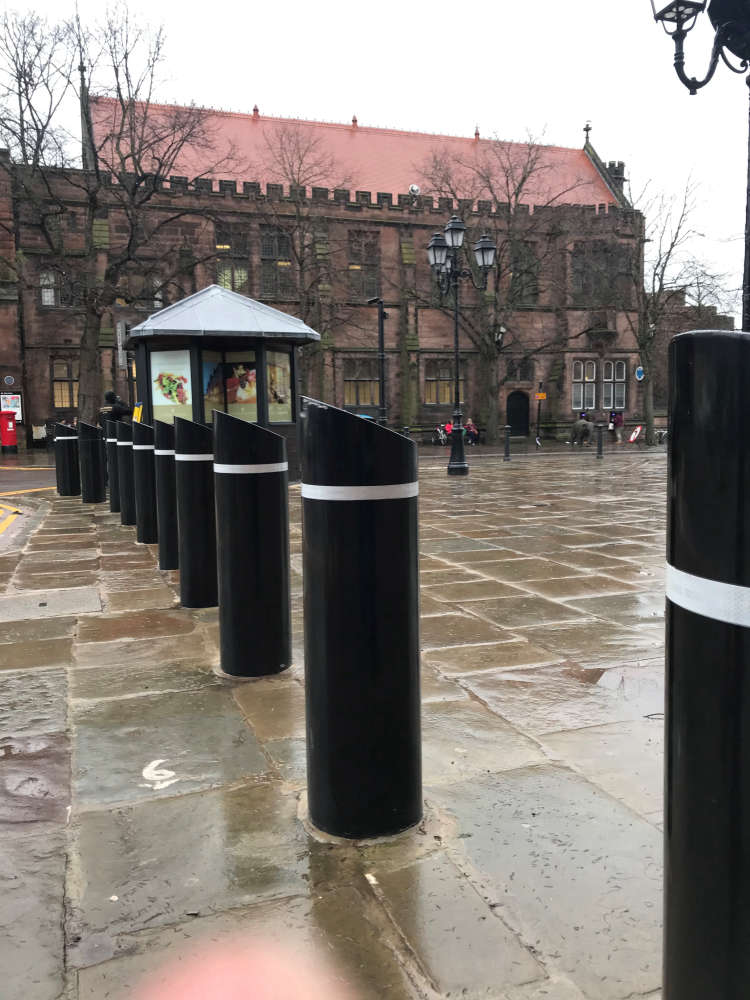 Residents and tourists visiting Chester for festive shopping and to attend the Christmas market will see improvements to the city’s safety measures from 26th November.

The bollards, which are in place in strategic locations around the city centre to prevent vehicles entering, are usually raised in the ‘up’ position between 10:30am to 4.30pm Monday to Saturday. The bollards on Bridge Street and Watergate Street usually remain ‘up’ until 8pm Monday to Sunday.

These hours will be extended from 26 November until 22 December to improve security for the crowds who enjoy coming to Chester to visit the Christmas market and city centre attractions.

Bollards at the Town Hall Kiosk, St. John’s Street, Bridge Street, and Watergate Street will be raised in the ‘up’ position, seven days a week, from 10.30am to 10pm for the duration of this period.

The only vehicles allowed access during these hours will be for exceptional and pre-arranged circumstances. These include bridal cars attending weddings at the Grosvenor Hotel, funeral cars attending funerals at Chester Cathedral, emergency service vehicles, emergency utility works vehicles and Council waste collection vehicles.

Blue badge holders, hotel guests, businesses, deliveries and residents will not have access during these hours. There is a range of alternative parking available in multi storey car parks, Hamilton Place, Frodsham Street, Weaver Street and on roads outside the central streets for blue badge holders affected by this change.

Retailers in the city centre should arrange for all their deliveries to be made before 10.30am, or after 10pm, during this period. The Council will work with the business community in Chester over the coming days to find solutions to issues which businesses may encounter with deliveries, caused by these changes.

“The threat level in the UK increased to ‘severe’, meaning ‘an attack is highly likely’, following recent incidents. Although there is no specific threat to Chester, to protect our residents, businesses and visitors, we have decided to increase the amount of time that the bollards are in the ‘up’ position during the day so that people who have come to the city centre to enjoy some shopping during the Christmas period are better protected and can feel more secure.

“The Christmas market is open until 6.30pm, Sunday to Wednesday, and 8pm, Thursday to Saturday. The bollards are not usually raised in the ‘up’ position during these evening times, so we have temporarily made these changes so that people can shop in the evenings in a more secure environment. The Council will work with affected businesses disrupted by this decision to protect livelihoods.”

“To ensure our streets are safer for shoppers, visitors, residents and workers Cheshire Police continues to work with our partners, the council, businesses and the public to disrupt criminal and terrorist activity.

“These bollards are just part of an overall plan across Cheshire together with overt armed policing to further enhance our safety measures which I hope is reassuring for all, especially in the run up to Christmas, which as we know, is our busiest time for the city.

“We have said for many years that communities defeat terrorism, and the help and support we get from the public is a vital part of that. So we would urge everyone to remain vigilant, and if you do see anything suspicious then please report it, in confidence, to police via 101 or 999 or the Anti-terrorist hotline or gov.uk/ACT. It won’t ruin lives, but it may well save them.”