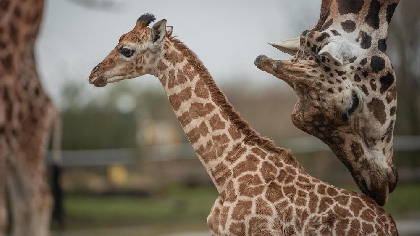 A two-week-old giraffe calf has stepped outside for the very first time at Chester Zoo.

A two-week-old giraffe calf has stepped outside for the very first time at Chester Zoo. The six-foot-tall newcomer held his head high as he made his first public appearance, venturing out with the rest of the herd including parents Dagmar and Meru.

The birth of the calf was captured by the zoo’s CCTV on Tuesday 5 March and the calf spent the first few weeks of his life indoors as he spent time forging important close bonds with his mum.

Zookeepers have named the new arrival ‘Mburo’ after an area of western Uganda which the zoo’s field conservation partners, The Giraffe Conservation Foundation, first translocated a group of Rothschild’s giraffes to - a vital conservation move to boost then dwindling giraffe numbers.

“Since being born just two weeks ago, Mburo has been spending lots of quality time with mum Dagmar and the rest of the herd. Now he’s really found his feet and his confidence is coming on leaps and bounds – his little personality is really starting to shine through.

“To see a young Rothschild’s giraffe calf strutting his stuff is really quite special – a real privilege when you consider that fewer than 2,650 remain in the wild. For many years they have been experiencing a silent extinction and it’s important that we help raise awareness of their plight and continue to help boost numbers in the international breeding programme, as well as assist with conservation efforts in Africa."

Rothschild’s giraffes are one of the world’s most at-risk mammals but recent news from Africa offers hope. It has been revealed that numbers are slowly increasing in Kidepo Valley and Murchison Falls National Parks.