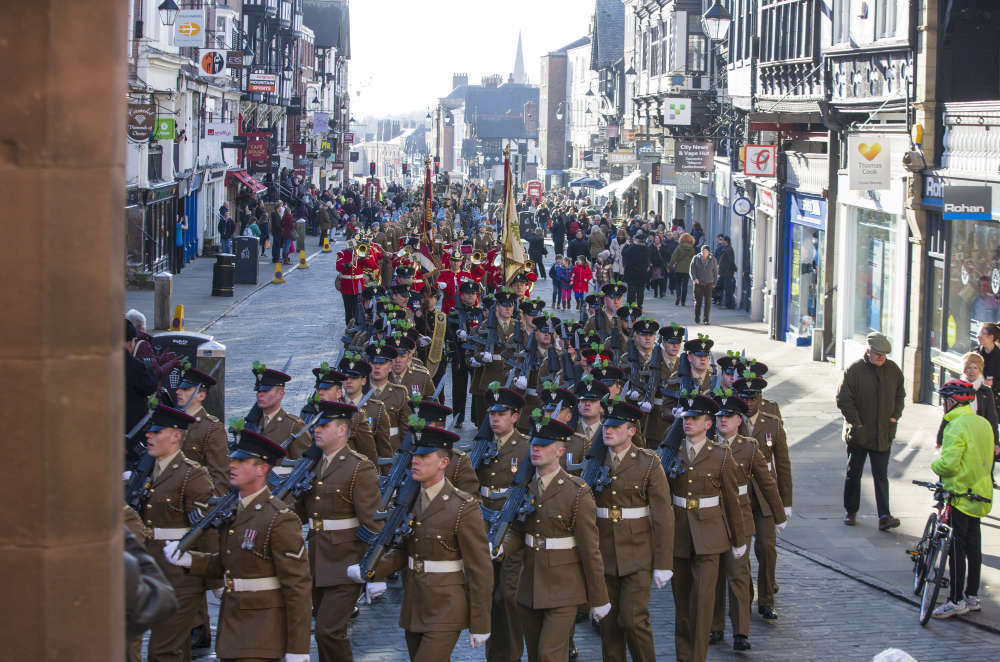 Soldiers of 1st Battalion the Mercian Regiment exercise their Freedom of Chester, which was granted by Chester City Council in 2008, on Tuesday 27 September 2022.

This historic honour gives the Regiment the right to march through the streets of the City with bayonets fixed, drums beating and colours flying.

The Parade will step off at 11.30am from Chester Castle and will include troops giving a standing salute at Chester Town Hall.  The Chairman of Cheshire West and Chester Council, the Lord Mayor of Chester, Lord Lieutenant of Cheshire and the Dean of Chester Cathedral will meet with some of the Regiment to hear more about their recent deployment and to give thanks for their service.

Councillor Bob Rudd, Chairman of Cheshire West and Chester Council, said: “The granting of the Freedom of the City is entirely a ceremonial honour, but is the oldest and highest civic honour that can be bestowed on a military unit.

“Having the Mercian Regiment parade through Chester provides a fantastic opportunity for us all to show our appreciation for everything they do and by lining the route people will be able to show their support and enjoy the parade.

“The Local Authority is working closely with Cheshire Constabulary and the Military to provide a secure and safe event for those wishing to attend and see the parade."

The Lord Mayor of Chester, Councillor John Leather, added: “It is such an honour and privilege to be part of this special and historic event.

“I would encourage residents, business owners and visitors to come and support the Mercian Regiment as they exercise their freedom through our beautiful city"

Picture was taken at a previous march through Chester in 2018.